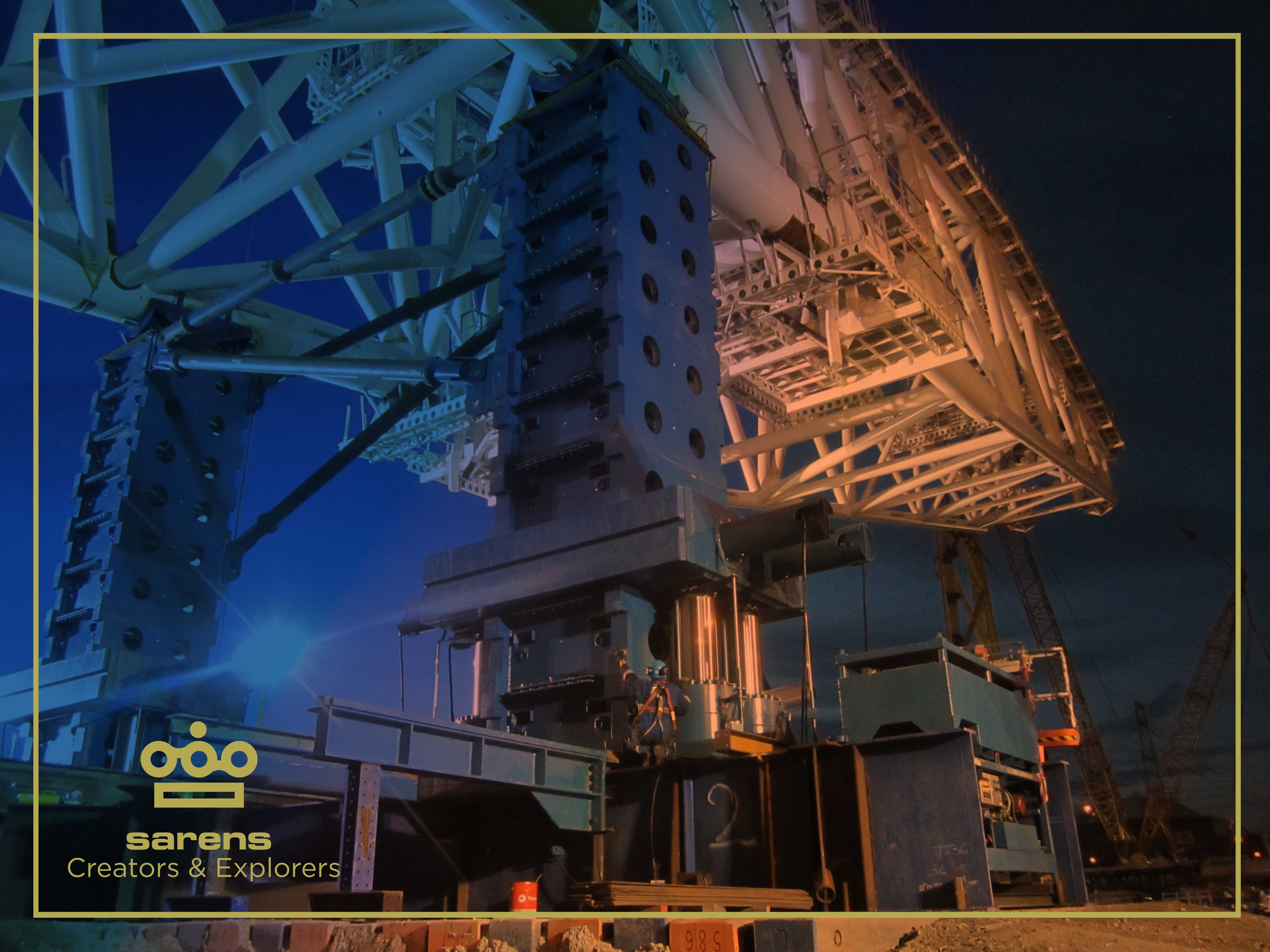 To look out at a 3.000-tonne bridge or a 12.200-tonne offshore module is to behold the astonishing scope and spirit of human innovation: structures that were once inconceivable are now increasingly common. But behind every visionary project that inspires our awe is a fundamental question: how is that possible?

We can design massive bridges...but how do we lift them into place?

We can envision enormous structures...but how do we install them?

We can draft plans for almost anything...but how do we put them into action?

At Sarens, these questions drive us. With generations of heavy lifting experience and a fleet of world-class equipment, we seek to answer them each and every day. Our work helps clients make their visions a reality, whether they need to lift an enormous bridge or an entire offshore housing unit. And when cranes aren’t a viable choice due to limited space or site access, our climbing systems often provide the optimal solution.

Dubbed “climbing systems,” the CS600 and CS250 reflected Sarens’ design philosophy at the time: each system featured a single jack that would “climb” the tower as its height increased. This approach allowed the jacking capacity to remain constant during operation because the jack was always positioned below the client load.

These original climbing systems are still in operation today. Most recently, the CS600 jacked down a 950-tonne bowstring bridge in France, despite sloping terrain and tight working conditions. “Each piece of equipment was carefully selected for this project, especially the CS600 jacking system, which met the specific requirements of being compact yet fast enough,” project manager Tom Jonckers explained.

The CS250 has also accomplished exceptional feats, including for the Darlington Bridge project in Adelaide, which required jacking several 3.000-tonne bridge sections. Sarens used SPMTs and eight CS250 jacking towers to create a solution that may well have been a first for Australian civil construction. Tim Devoldere, operations manager for Sarens Australia, explains why it was so effective:

“Imagine four people carrying a log on their shoulders. When going through a dip, the people in the middle will have to raise their arms in order to keep supporting the log. If the dip becomes too deep, their arms might not be long enough. That’s what happens when SPMTs run out of stroke. By introducing the CS250 jacking system, we gave these people longer arms.”

Building on the success of earlier solutions, Sarens soon followed its instinct for innovation to design and develop a new generation of bottom-feeding jacking systems: the CS5000, CS1000, and CS350.

The first of Sarens’ new-generation climbing systems, the CS5000, was constructed in 2014. It has an unbraced lifting height of 20m and lift speed of 2m/hour. To this day, it remains the mightiest, with a capacity of 5.000 tonnes per tower. Sarens then unveiled the CS1000 in 2016. This climbing system can lift 1.000 tonnes per tower, has an unbraced lifting height of 10m, and boasts a lift speed of 3m/hour. Sarens’ newest climbing system, the CS350, joined the fleet in 2020. Its lifting capacity is 350 tonnes and it features lift speeds of 3.6m/hour. The CS350 can also lift unbraced loads up to six metres.

This new generation of climbing systems features an innovative bottom-feeding design. Although we still refer to them as “climbing systems,” the jacks don’t “climb” the tower at all, but remain at ground level.

This design choice comes with distinct advantages. The automatic bottom-feeding system, for example, provides easy access for 100% ground-controlled safe jacking. Four ground-based hydraulic jacks are at the base of each tower, eliminating the need to work at height and creating a safer operating environment. Finally, a centralised computer system ensures accuracy to within 0.1mm (CS5000), 0.05mm (CS1000), and 0.5mm (CS350).

Sarens’ innovative climbing systems have led to the completion of projects that would otherwise have been inconceivable. The mighty CS5000, for example, was instrumental in jacking a 4.200-tonne stinger for the world’s largest offshore construction vessel, the Pioneering Spirit. For another project, four CS5000 towers were used to jack an entire 12.200-tonne oil field housing module in Norway. The CS1000, meanwhile, made its debut by installing a 2.000-tonne segment of the Schierstein Bridge across the river Rhine in Germany.

Of course, no lift would be possible without thoughtful planning and careful attention to logistics. This is why all Sarens climbing systems are built to be fully containerised for easy transport. We also design them to have a limited footprint, with low minimum starting heights and multiple tower set-up possibilities to give clients a greater range of options.

At Sarens, we are dedicated to continuing a proud tradition of thoughtful design and innovation. As we orient ourselves to the future, we look forward to what these extraordinary climbing systems have yet to achieve—and all the “impossible” things they will one day bring into being.