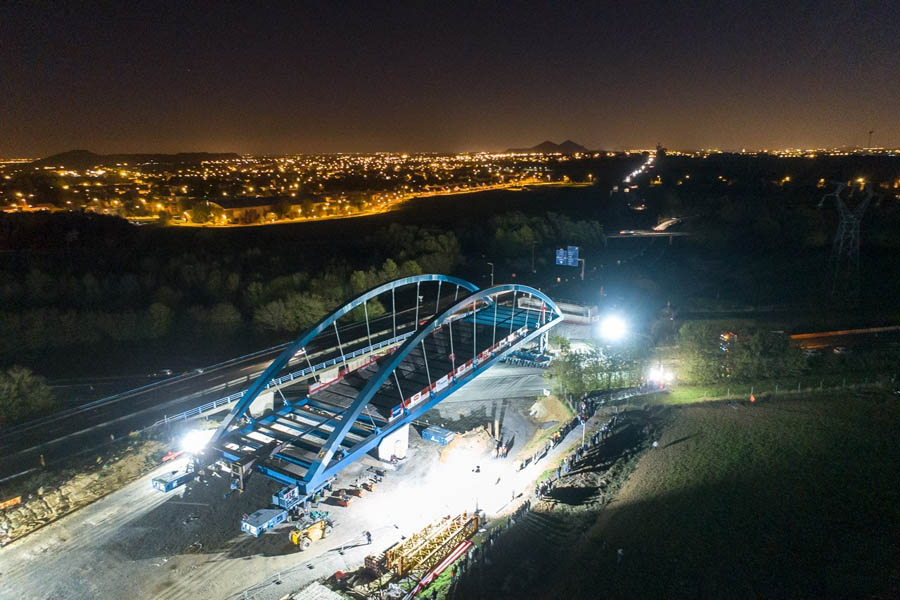 April 2019:  This past October, Sarens was on site in Aix-Noulette, France, to install and jack down a 950-tonne bowstring bridge for client Eiffage. But although Sarens has left its mark on many bridges around the world, this particular project came with its own unique challenges.

During the engineering phase it became clear that this would be no ordinary bridge installation. First, the surrounding terrain, as well as the bridge itself, were sloped in two directions-along both the bridge length and width. Second, there was another bridge in the immediate vicinity, and it would remain operational at all times. This meant that no equipment could exceed the width of the bowstring bridge in the direction of the neighbouring bridge.

Finally, the bridge had to be installed along its longitudinal axis, which required carefully-selected equipment including 40-axles SPMT, a CS600 jacking system, and an HSL 450 strand jack. As project manager Tom Jonckers explains, "Each piece of equipment was carefully selected for this project, especially the CS600 jacking system, which met the specific requirements of being compact yet fast enough. Compact equipment was required because the neighboring bridge limited our working space, whereas jacking speed was necessary to meet the deadline for the road opening."

The 6-member crew successfully executed this operation within two nights. Sarens commends everyone involved in coordinating this precise operation!