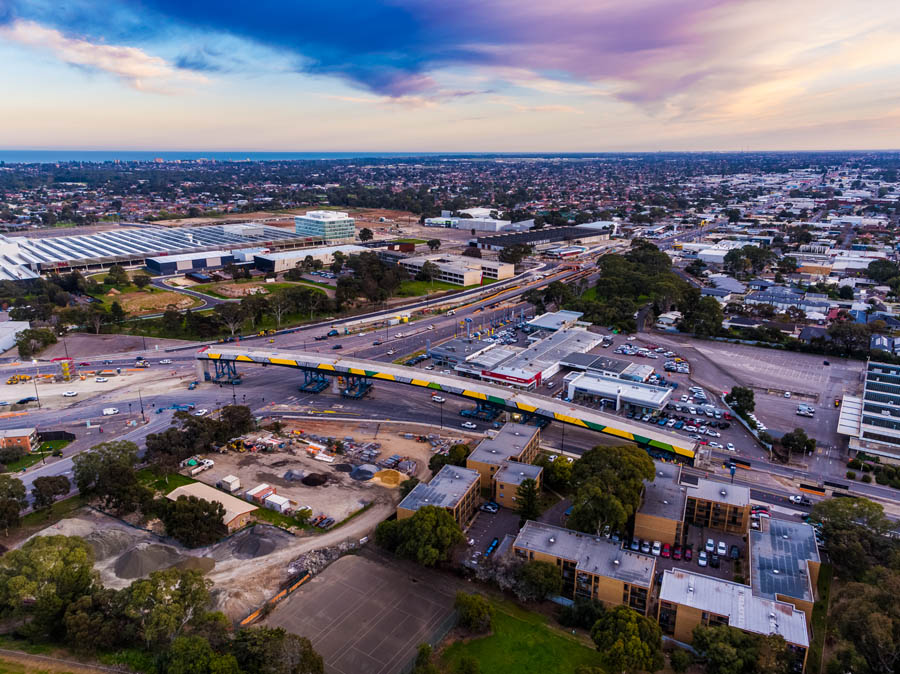 With the $620 million Darlington Bridge project nearing completion, Sarens was on site to install three more bridge sections from August through November of 2018. This phase of the project built on  Sarens' earlier success installing a 3.000-tonne bridge section in 2017. For this operation, SPMTs would again transport and install massive bridge portions in Darlington, Adelaide: bridge BR02, bridge BR03, and bridge BR14-N.

Up until now, bridge moves of this size were unheard of in Australia, so Sarens' early involvement in the planning process was key. From the very beginning, Sarens provided ABC (accelerated bridge construction) workshops and use of SPMTs for bridge construction to client Gateway South and end client DPTI (Department of Planning, Transport and Infrastructure South Australia).

Sarens engineers had to plan for some special challenges during this operation. First, the travel path for bridges BR02 and BR03 had a significant change in transverse gradient, resulting in an insufficient SPMT stroke. To remedy this, Sarens' engineering team introduced the CS250 jacking system on the two outermost SPMT units.

Tim Devoldere, operations manager for Sarens Australia, explains the solution in layman's terms: "Imagine four people carrying a log on their shoulders. When going through a dip, the people in the middle will have to raise their arms in order to keep supporting the log. If the dip becomes too deep, their arms might not be long enough. That's what happens when SPMTs run out of stroke. By introducing the CS250 jacking system, we gave these people longer arms."

Another challenge was the huge curvature of the 14-N bridge section. To account for this, SPMT units had to be perfectly aligned perpendicular to the radius of the curve.

Within a span of 12 weeks, equipment was mobilised from all over the world, including Belgium, Vietnam, and Australia. However, in some cases equipment was held at port for two months due to strict Australian quarantine regulations and inspection requirements.

Once the equipment was ready, operations commenced along a busy highway through Adelaide, and the 16-member crew worked on a tight schedule to minimise traffic interference. For each bridge, the road closure allowance was 56 hours, though the actual duration of transport varied from 16-22 hours.

Working in August, September, and November, the crew installed the following bridge segments:

The crew used 132 axle lines SPMT and six power packs to install each of the bridges. Bridges BR02 and BR03 also required the use of eight CS250 jacking systems.

"The SPMT transport and installation of bridges of this size was a first in Australia," says Tim Devoldere. "The successful completion of this project is a result of the early involvement of our KAM Brett Beveridge at tender stage, the detailed engineering led by Peter Keyen in head office, and the excellent cooperation between all business units and highly-skilled multinational crew involved during preparation, logistics, and actual execution."

Nigel Hird, project manager at Gateway South says, "The success of these incredibly complicated installations is a testament to Sarens' commitment and capabilities. The staggering amount of engineering, planning, and then seamless execution of these works received the highest levels of praise from all parties involved."

Sarens is proud to have been a part of this tremendous project, and would like to thank everyone who has been involved from start to finish.