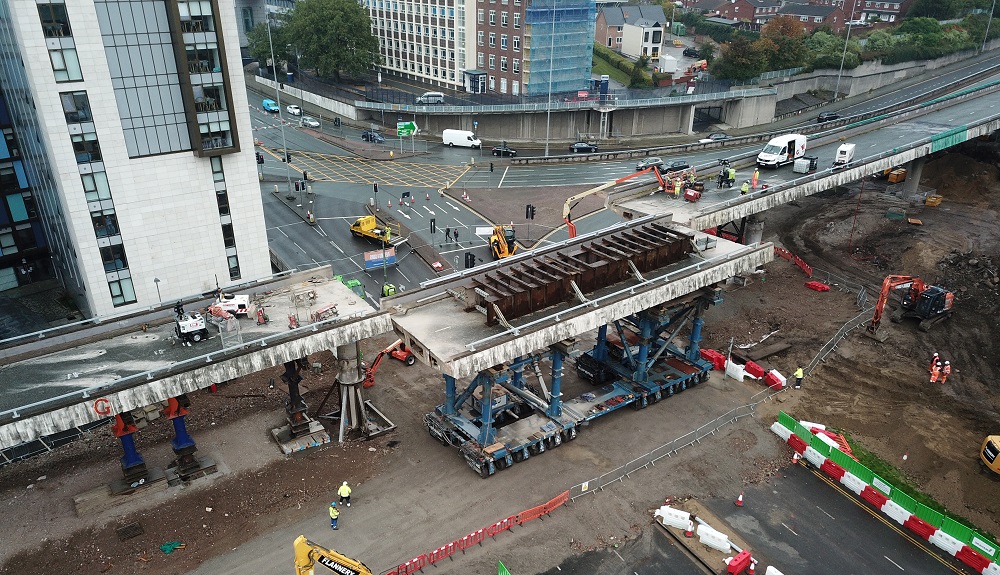 Sarens is proud to have been part of the Churchill Way Flyover Deconstruction Project in Liverpool city centre, which has been honoured with the ICE North West Constructability Award.

From September through December 2019, Sarens worked with S Evans & Sons, Grahams, and the Liverpool City Council to help remove the Churchill Way flyovers. These aging structures consisted of 20 spans measuring between 20 and 35 metres, weighing up to 600 tonnes, and rising up to 14 metres high.

Removing the flyovers presented a complex engineering challenge because of the surrounding buildings and roads. Precision was required to remove the spans with minimal disruption to nearby roads and especially without damaging a museum located within metres of the flyovers and housing many rare and expensive artefacts.

Sarens was approached only 12 weeks prior to the project’s execution, and within a short time Tom Betts and Chrisopher Macfarlane, supported by Carl Sarens at headquarters, developed a technical and commercial proposal far superior to the competition.

The proposal recommended building a steel structure atop SPMTs in order to lift each deck section using the trailer stroke and then saw cutting (done by other contractors). Once free from its supports, Sarens would transport the deck sections to one of two SARLIFT structures in the jackdown area, connecting them via soft slings. The SARLIFT would then lift the deck off the SPMT and steel structure, allowing the SPMTs to be removed and reconfigured for the next flyover section. Then, the bridge sections would be jacked down to a height of 1,5 metres, where they could be cut into pieces suitable for road transport. Finally, Sarens would lift and transport them to the processing area.

The operation as outlined required the following Sarens equipment:

All stakeholders embraced the proposal, and Sarens was awarded the project. With only a few weeks before execution, Sarens fully engineered the entire scheme through Tom Betts and Rob Frost. Sarens then mobilised all equipment and assembled, tested, and commissioned everything on site prior to the first of several road closures in Liverpool city centre.

During the project, Sarens hit every milestone with utmost professionalism and kept road closures and road closure durations to a minimum.

“It was a pleasure to be involved in such a project from the very start to the very finish, and I thank every person involved,” says Sarens project manager Chrisopher Macfarlane. “It was a fantastic achievement made possible by Sarens engineering capabilities and the world-class people that we employ.”

“Hard work and long hours are an understatement, but every single person thoroughly enjoyed being involved,” says Sarens site manager Marc Dodds. “We made some great relationships that will last a long time.”

Sarens is pleased that its innovative engineering and hard work have helped earn this project an ICE North West Award. We are also proud of the collaboration with our clients and other on-site contractors in what was truly a team effort.

“Sarens surpassed all of our expectations,” says Grahams contract manager Stephen McFaul. “Engineering and mobilisation were impressive enough, but the operation itself was incredible. In a city centre environment with the constraints of the small site, it was great to see Sarens performing such technically complex works on time and on schedule. The culmination of all the contractors on site resulted in the Constructability Award for ICE North West. We are really looking forward to the next project where we can work with Sarens again.”

Find out more about us in our brochure here!