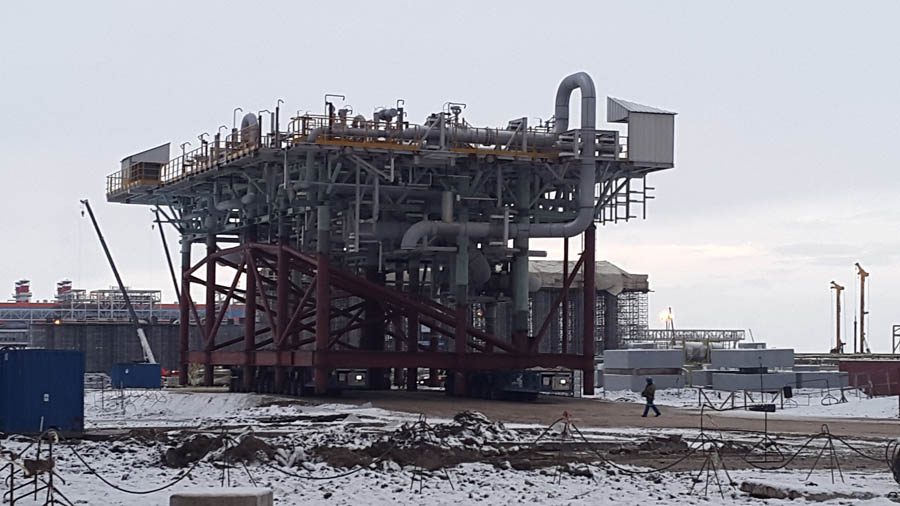 At the edges of the Arctic Circle lies a land of harsh Arctic winters and extreme isolation. Here, some 2.500km north of Moscow, the only inhabitants are Nenets, the region's nomadic reindeer herders. And here, one of the most important natural gas projects in Russia is taking shape: the USD 25 billion Yamal LNG project, led by Novatek and Total.

Braving the extreme cold, brutal winds, and isolated terrain, Sarens is transporting and lifting 630t tank modules for client Entrepose-Vinci, one of the project's main subcontractors. Vinci is in charge of assembling four 160.000m3 tanks, under the direction of the Technip-JGC-Chiyoda consortium, which is leading the LNG plant's installation.

The Sarens team has also completed one of the project's most challenging lifts: placing a 630t main platform on top of a tank. The platform, which measures 42m x 25m x 15m, was transported by SPMT from the Sabetta port site to the project site, a distance of about 3km. It was then lifted at a 30m radius.

Project manager Abderahim Bouazza says that this is operationally the most difficult lift, demanding 99.7% of crane capacity. "As you can imagine, the engineering was very important for this special lift," says Bouazza.

This lift will be repeated for the other tank modules as the project continues through July 2017. During this time, the Sarens team will be staying at the Sabetta compound established by Entrepose.

"We are proud to be associated with one of the most important projects in Russia," says Marco Torri, key account manager. "It is worth mentioning the dedication of all members of the Sarens crew who worked and are working in Yamal by accepting the difficult weather, long days and nights because of the latitude, and an isolated job site."

Sarens is using a winter kit that can withstand temperatures of -30° C, deploying the following equipment at the project site:

The crane was transported from Canada, and the boom booster came from Houston. All material traveled through Antwerp and was transferred to the client ship for 3-4 weeks of sailing. It then took three weeks to set up the equipment on-site.