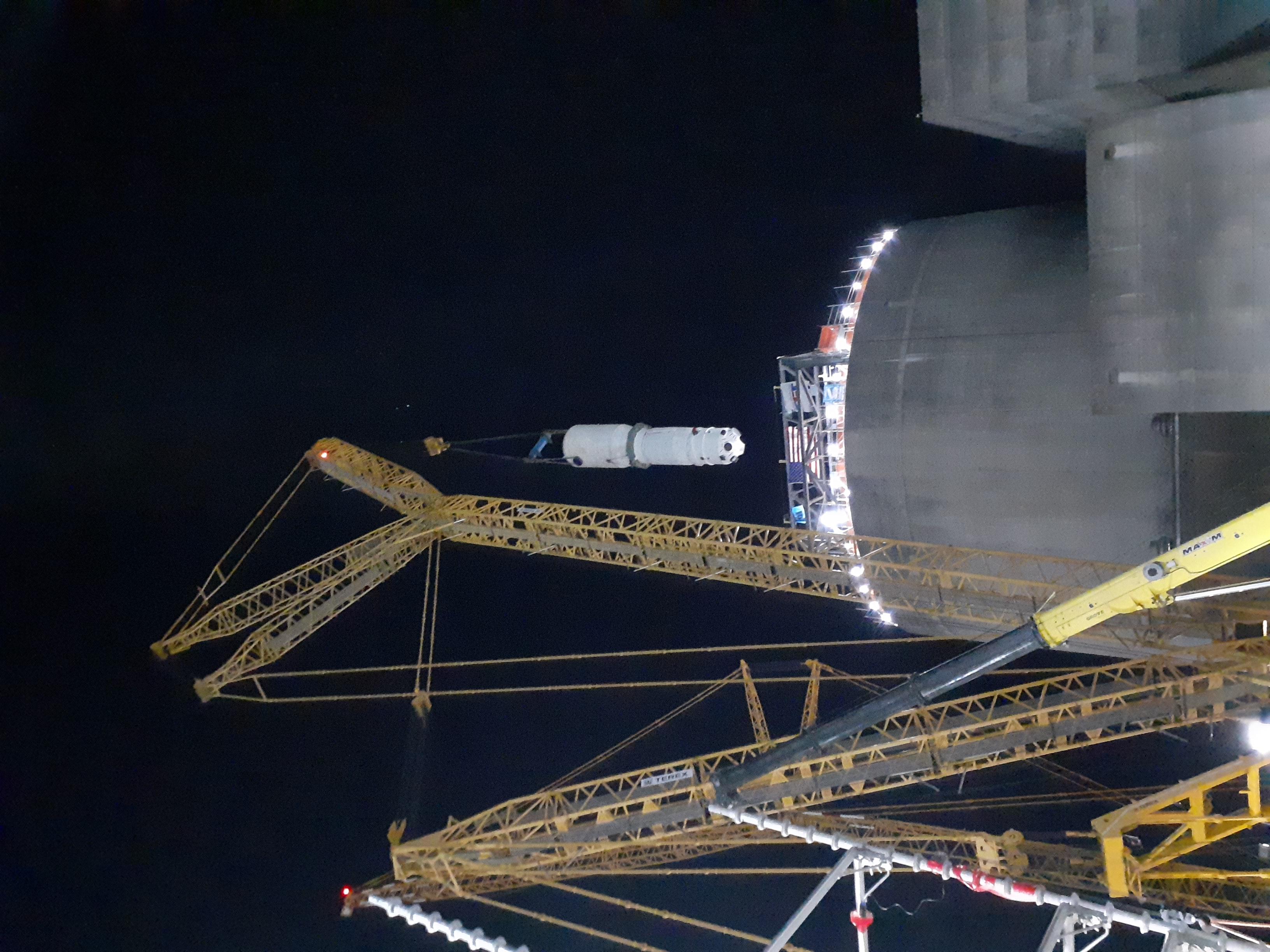 This spring, the Tennessee Valley Authority (TVA) initiated a major nuclear refuelling and maintenance outage so that four replacement steam generators could be installed at the Watts Bar nuclear plant–one of the USA’s newest commercial nuclear reactors. Sarens was called in to perform several major lifts for this high-security, high-stakes operation, and brought its best people and equipment to the job.

The team’s first mission was to remove two concrete dome sections at the Spring City, Tennessee site. Sarens built two lift and support frames for the 3-foot thick concrete cutout, which was then water blasted for removal while the crew carefully monitored jack pressures and tensions. They used the Terex CC 8800 crane to remove two steel dome liner sections, four steam generator cubical roof sections, and four old steam generators. These were lifted through cutouts atop the containment building, transitioned to a down/upending device, and transported via SPMTs to a concrete storage facility.

Next, the Sarens team installed replacement dome liners, covers, and four new steam generators, which were brought in from storage and upended so they could be sent through the roof of the containment structure. The new steam generators weighed approximately 800,000 pounds and measured over 68 feet long, with a nearly 16-foot diameter and 168-foot radius.

Sarens had to be extremely careful when lifting each load in and out of the cubical, turning the generators many times in order to miss interference, including lining up to piping within a 1/16 of an inch.  The lifts also had to be crawled to two different locations for lifting out the containment structure and when down/up-ending.

The equipment deployed for this project included a Terex CC 8800 crane with a 236-foot main boom and 118-foot luffing jib; a Manitowoc 2250 crane for erecting and dismantling the CC 8800 and stacking counterweights; and a Liebherr LR1400 for assisting in dome concrete replacement and erecting the steel support structure. The cranes were carefully selected and transported to Watts Bar despite an environment of ever-increasing trucking costs and the restrictions of necessary security procedures at the protected nuclear site.

Although Sarens is used to a variety of working conditions, this project presented its own challenges–among them high winds and numerous storms that required cranes to be boomed down several times for safety reasons. Sarens also had to meet lower ground bearing pressures for the soil, driving piling in the ground to support the crane’s weight. Finally, the team needed to determine specific load paths for lifts around sensitive equipment, with special consideration of height requirements.

“There were many challenges in getting this major project to where it is today,” says Vice President of Nuclear Division, Joe Justus. “Our team worked tirelessly to get the required deliverables to our client and meet critical milestones within a very limited time. From proposal development and contract negotiations to engineering and implementation, our team has demonstrated world-class professionalism and dedication.”

“I would like to take a moment to personally thank all the Sarens’ personnel, craftsmen, and craftswomen on this project for their contribution to its success,” Yustus says. “Without them, it would not have been possible.”

Sarens congratulates our team of 16 crew members, who worked day and night to ensure the success of this important project.