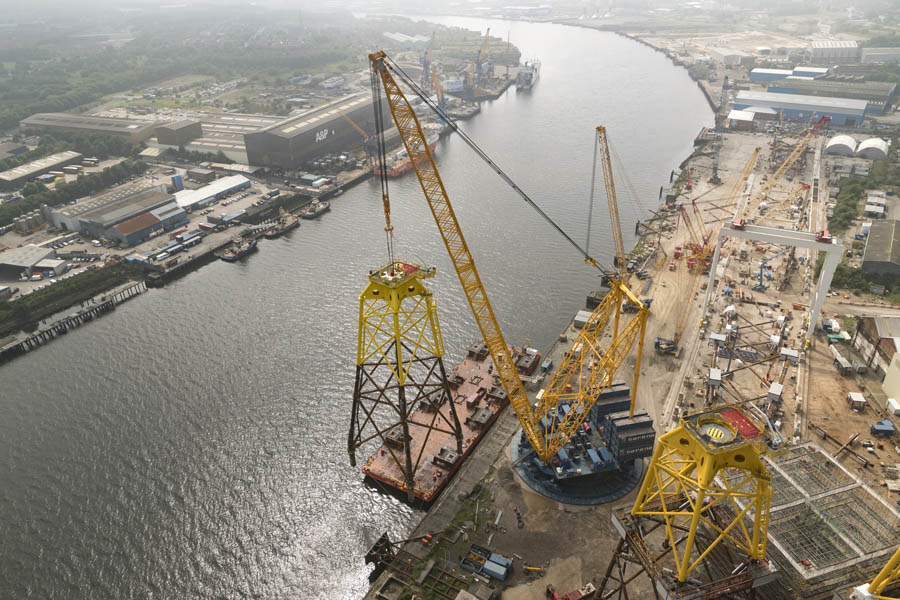 The SGC-120 is one of the world's most massive cranes: it has a 130-metre main boom and is capable of lifting 3.200 tonnes. Recently, Sarens deployed it for a load-out and assembly operation at the Smulders Projects jacket yard in Newcastle, UK.

"Assembling a crane like this is a project in itself," says Global Technical Solutions Engineering Manager Peter Huygebaert. "There's a 45-metre ring footprint. The boom is 130 metres long, so you need a place to assemble that on the ground as well. You need a decent-sized crawler crane to install the counterweights, which weigh 100 tonnes each, 36 of them. But all that together pays off, and in the end you have a crane that has over 3.000 tonnes of capacity."

You can watch the newest video of the SGC-120 being assembled and load tested for this operation here.

Once Sarens operators prepared and load tested the crane, it was ready for action. The SGC-120 lifted the 397t wind farm modules off the barge and set them 120 metres away from the load-out site. It also placed the upper jacket on top of the lower jacket, achieving a final height of about 70 metres.

A total of 28 of these wind farm jackets are destined for the Beatrice Offshore Wind Farm, and our client Smulders is responsible for their construction and installation. Sarens is proud to have supported this operation by assembling the SGC-120 crane on site and providing it for the client's use.

However, the SGC-120 wasn't the only star of this operation. Sarens deployed approximately fifteen other cranes, including:

Check out the video of the impressive lift of the jackets by the SGC-120 here!