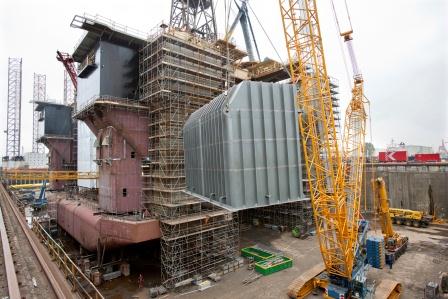 Keppel Verolme completed the extensive upgrade of the semisubmersible drilling vessel Scarabeo 6. Sarens was contracted for all the heavy lifts and site moves for this upgrade, taking place in one of the biggest dry docks in the world. After bringing the vessel into the dry dock a 600t CC 2800-1 and 750t LR 1750 were rigged with 80m of main boom and superlift. The heavy lifts consisted amongst others of new blister parts (260t) and sponsons (100t).

This was not the heaviest of lifts for Sarens, but never the less the removal of the crown block from the derrick at a height of 112m was quite impressive. Preparation of the work started in 2011 and after mobilization of the cranes in April 2012 the heavy lift scope was executed within the foreseen time frame of 4 weeks. Sarens' complete scope ended in November 2012 without any lost time incidents.