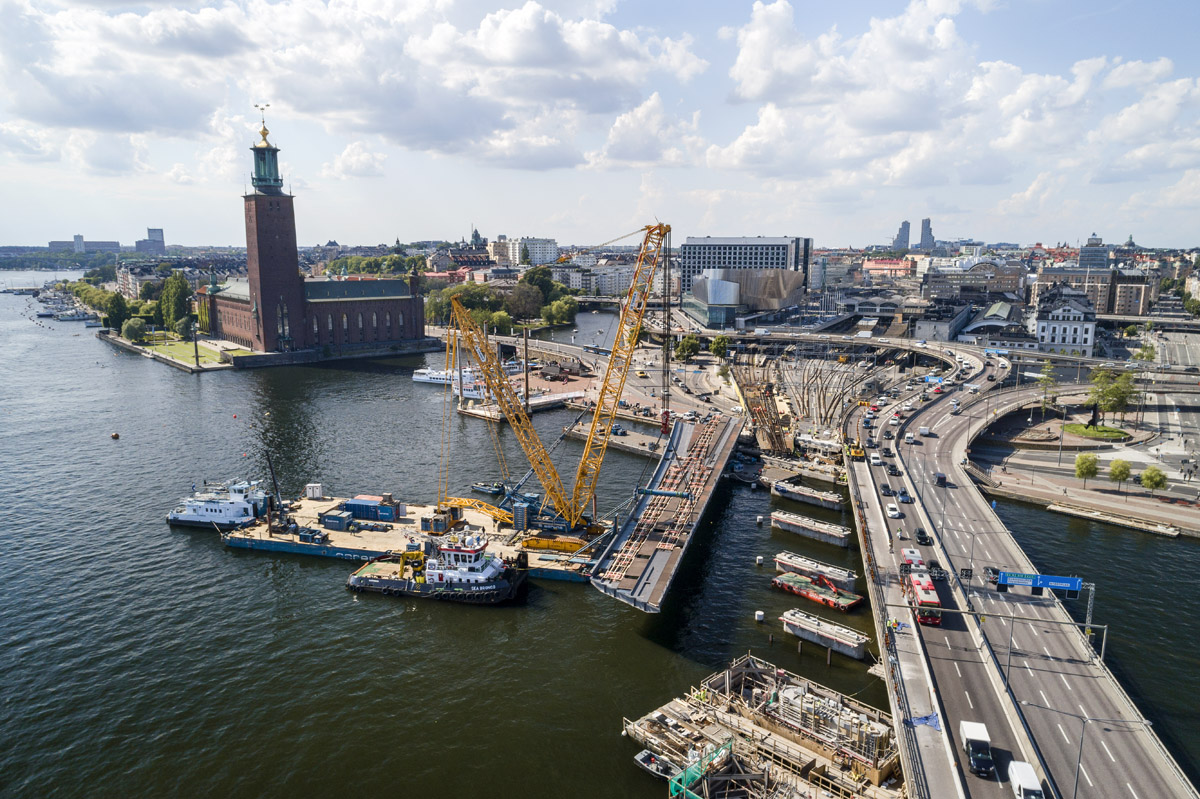 One of Sweden’s busiest railway connections in Stockholm’s city centre, Getingmidjan, is a two kilometre-long railway line that links the northern part of the city with the south. It passes the famous island of Riddarholmen. Riddarholmen is connected to the mainland by two railway bridges, the northern part (Norrström) and the southern part (Söderström).

In 2019 Sarens successfully removed the old and installed the new Söderström Bridge and because we did this so successfully, Sarens has again been contracted to carry out installation work on the Norrström Bridge in early 2020. According to the Project Manager, Willem Ditmer, “This project had a number of challenges that were significantly different than those encountered while working on the Söderström Bridge and it will therefore be anything but a ‘copy and paste’-type operation.”

Sarens was commissioned to undertake the following:

·        Transport of 2 bridge segments (North and South part) of the Norrström Bridge from Estonia towards Sweden.

·        Load-over to inland transport barges to pass a small lock in Södertälje.

·        Installation of both bridge parts in Stockholm.

Stockholm is surrounded by lakes, canals, and several locks along these waterways to the Baltic that limit the size of barges and ships that are able to pass. This was one of the challenges that had to be taken into account during the planning phase as the maximum lock width in Södertälje was 19m. All barges for the installation had to be smaller than 19m but sufficient enough to lift the sections. Due to Covid-19 pandemic the team also faced travel restrictions and other regional restrictions. Since the bridge is one of Sweden’s busiest railway connections it added additional challenge to completing the project in a short time.

The team decided to deploy a CC 3800-1, at the aft of the barge Karel & Victor, to remove the old bridge parts. Karel & Victor were uncoupled when they were transported to Stockholm. Additionally the team deployed:

One day’s sail away from Stockholm, at Västeräs, barge Karel & Victor were uncoupled and the CC 3800-1 was assembled onto the barge as it was not possible to load the crane using the RoRo method. The positioning of the crane-barge combination was carried out through the assistance of two pusher tugs, one at the aft and the other next to the barge. A GPS positioning system was during the process to enable precise positioning of the barge.

Next, the spud piles were lowered onto the bottom after a meticulous survey of the site by the ROV underwater drone. Sarens used Delta flipper anchors in five strategic locations to withstand a pulling force of 30T and were positioned and tested with an anchor handling tug.

All the parts were removed within six consecutive days, with as many as five parts being removed in one single day.