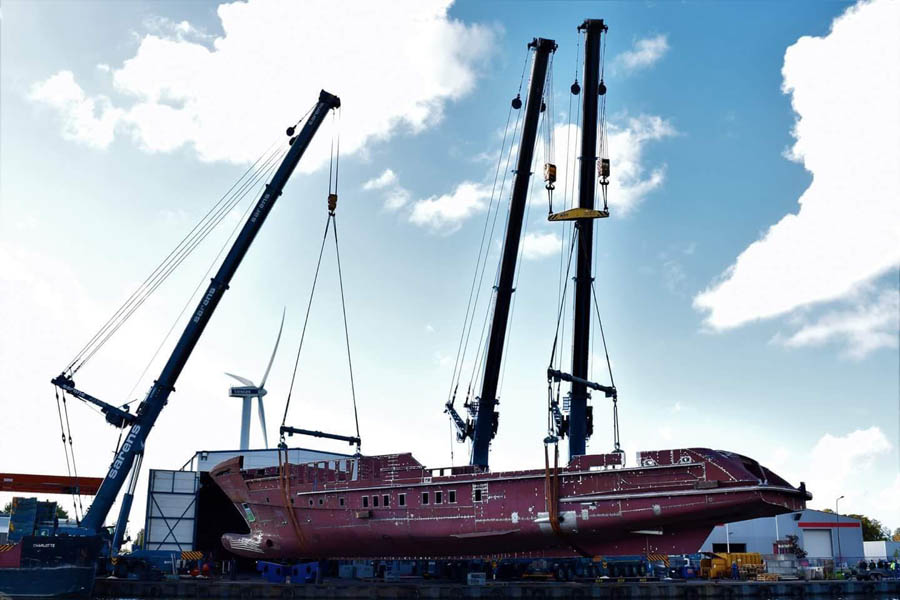 Sarens recently rose to the challenge of lifting and transporting a 244-tonne, 55-metre long ship's hull at the Talsma Shipyard in Franeker, the Netherlands. Although the operation came with several challenges, it was a resounding success that was recognized industry-wide, earning the ESTA Award of Excellence in its category!

This was a challenging lift because of the narrow quay and the lack of height inside the workshop building from which the hull was being lifted. Because the ship's hull measured 7.9 metres high, it was a substantial height to handle within such a small space. But by using a trio of AC700 cranes and a 12-axle platform trailer, Sarens came up with a solution to transport and lift the massive ship's hull despite these obstacles.

To complete the lift successfully, Sarens had to account for the length of the hull in relation to the quay's width. The platform trailer was positioned with its first axle on the edge of the quay and no room to move forward. This meant that the crew had to lift the hull while some of it was still inside the building.

During the lift, there was very little space between the back of the hull and the luffing cylinders on the AC700s due to the maximum radius of this crane. Additionally, two AC700 cranes were positioned to slew very close to each other, increasing the challenges inherent in the lift. The crew used a single point lifting beam for the two AC700 cranes in order to deal with small differences in the lifting speed between them.

Sarens is pleased to have completed another challenging project with the precision, excellence and innovation that the Group is known for. Thank you to everyone who helped make this lift a success!