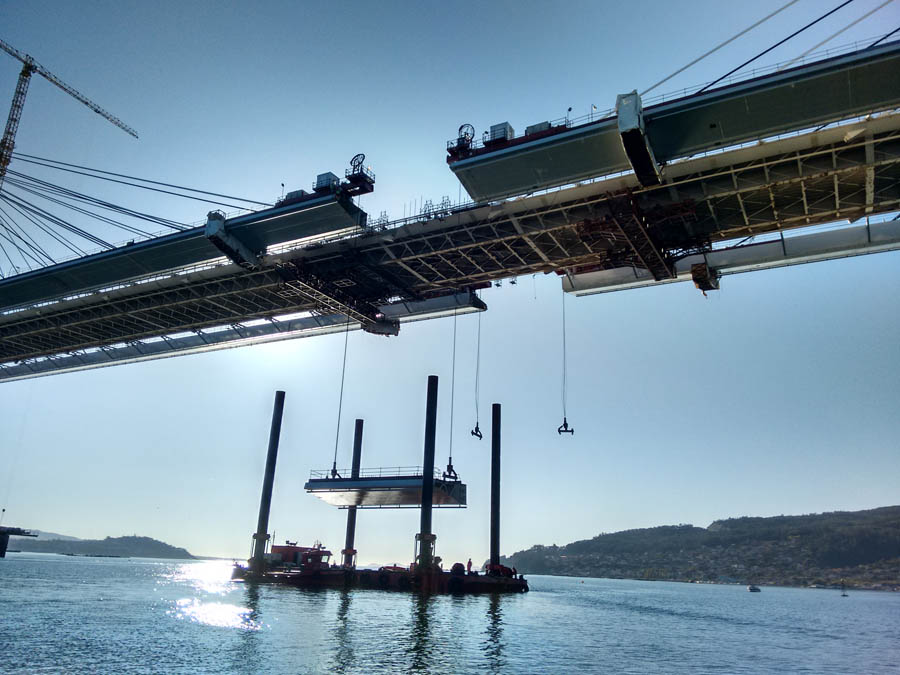 Sarens is proud to be a part of the Rande Bridge expansion effort near Vigo, Spain. Recently, the Sarens team worked to lift 56 new steel segments, each weighing up to 105 tonnes, to widen the bridge. The work was completed on behalf of client JV Dragados-Puentes and owner Audasa.

The cable-stayed Rande Bridge spans the River Vigo, linking Redondela to Moaña. It is considered a defining icon of Vigo, rising 40 metres and stretching 700 metres long. It opened to traffic in 1981, but by 2006 its average daily load reached 47.000 vehicles, resulting in frequent congestion. A widening project was presented as a solution: it would increase the bridge's capacity from four lanes up to six, without the need to construct a completely new bridge or even interrupt traffic on the existing bridge.

As part of the expansion, two new external decks will span both sides of the existing bridge. To help execute this vision and install the new segments, Sarens operators used 16 SJs 105t with coiler and 3 computer control systems. They mobilized half of the equipment within a very short timespan in order to set up eight working lift areas at the same time. The team spent three days transporting equipment from Sarens headquarters by truck, and another month setting everything up.

Sarens faced the challenge of lifting two segments of the same transversal section of the bridge on the same day, with two different barge transports. Furthermore, they had to achieve this without any closure to road traffic on the bridge. They worked up to 60 metres above the water, using two lifting points per segment, and drawing on the talent of up to three crewmembers.

Ultimately, the project was a great success. "Fifty-six manoeuvers were performed without a single incident, and the client is fully happy with the work performed by our team," says José Mª Martínez Gutiérrez, Key Account Manager, Technical Solution Sales Department.