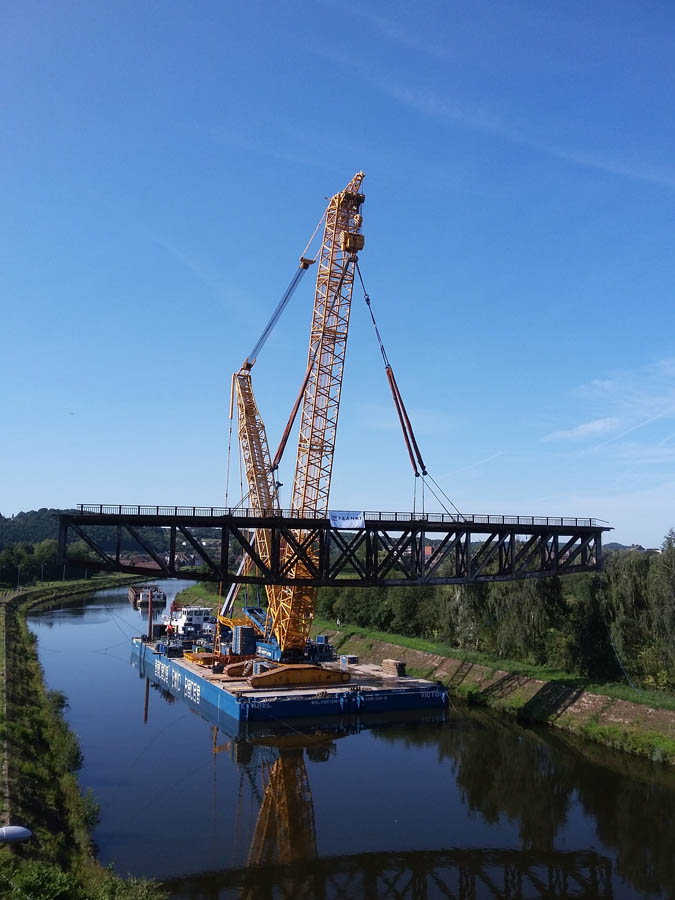 In late August, Sarens worked with client Franki to replace an old railway bridge in Tamines, Belgium. To do it, operators used a lattice boom crane and the twin barge Karel-Victor during a multi-stage operation. (You can see the video of the operation  here).

First, an LR1750 lattice boom crane was used to load the new 360t, 54.1m-long bridge onto an inland vessel at Seilles, Belgium for transportation to Tamines. For this, Sarens operators used an SDB 42m configuration with 220+95t counterweight and 330t SL ballast. The crane could not be positioned next to the quay due to the presence of a gas line, so it was kept 9m from the edge, which determined its capacity.

Meanwhile, at another site, an LR1600-2 lattice boom crane was loaded onto the coupled barge Karel-Victor for the one-day journey to the bridge installation site. Because of physical limitations, including river width, depth, and bridge heights along the route, the barge Karel-Victor was the largest possible barge that could be used. Smaller barges, however, were not an option because of the stability requirements of the crane on the barge.

The low height of the bridges along the transport route meant that the LR1600-2 had to be transported on the barge almost completely disassembled. Once it arrived on site, operators spent two days assembling it onboard the barges into an SDB 48m configuration with 150+65t counterweight and 220t SL ballast with fixed B2 stinger.

Once everything was ready, operators spent one day removing the two old bridges, which weighed 250t and 180t respectively and measured 54m long. The next day, they placed four concrete foundations weighing 65t, 50t, 15t, and 10t. Finally, they spent one more day installing the new railway bridge.

The lifts with the LR1600-2 (with floating superlift) were conducted onboard the barge Karel-Victor. After pickup of the load, the crane had to slew and crawl on the barge.

"The stability of the barge was a very critical factor in the operations, and the barge needed to be ballasted accurately during the lifting/slewing/crawling operations," says Kenny Decoster, Project Manager." This required very close coordination between the crane operator and the barge supervisor. The team accomplished the challenge in the safest manner."