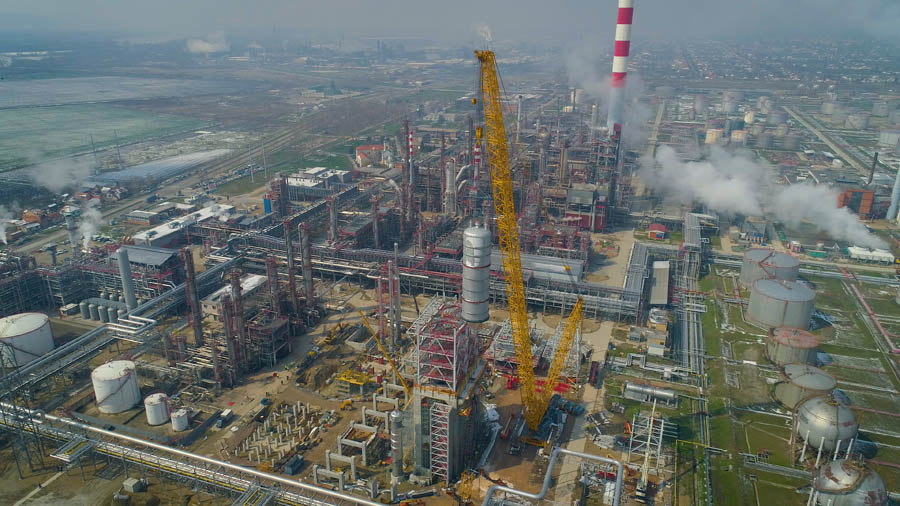 Serbia's Naftna Industrija Srbije (NIS) JSC, began construction of its bottom-of-the barrel (BOTB), complex as part of its modernisation programme to improve energy efficiency and increase production of higher-quality products, ensuring operational reliability at its 4.8 million-tonne/year refinery at Pancevo. Once operational, the 2,000-tonne/day BOTB complex will increase Pancevo's processing efficiency from a current 86 to 99.2 percent as well as increase the refinery's production of high-quality, low-sulphur gasoline, and diesel by more than 38 percent.

Sarens was chosen by NIS/CB&I to perform the load-out, transport, jacking, skidding, and lifting of equipment, two coke drums under a pipe rack, and steel constructions at Pancevo in Serbia. To undertake the project, the team deployed:

CC6800 with SSL 114m configuration, came from Rostock by road; SCX2800 with MB 48.75m configuration, came from UK by ship to Rotterdam and then by road to Pancevo. All other equipment came from Belgium by road. CC6800 was rigged in a congested area as there was only one access road of 130m x 12m. All trucks had to enter in reverse direction to be unloaded by the SCx2800, which rigged the main crane. The equipment was ready to perform the lifts in ten days.

The project comprised of two stages:

The team performed the transport and lift of:

The fifteen member crew placed all the components on top of a concrete foundation making a total height of 91.5m. According to Abderahim Bouazza, "For all the lifts, the crane had to pick up the load in tandem, slew and crawl with the load up to 40m. It was a challenging project to be performed in a very confined space with each component being both heavy and huge. Our teams coordinated to successfully complete the project under the guidance of our safety manager."