Sarens Home
»
About
»
Projects
»
Bridge installation in Nijmegen
Sarens recently installed a new bridge across the Waal river in Nijmegen, the Netherlands.
22
May 2013 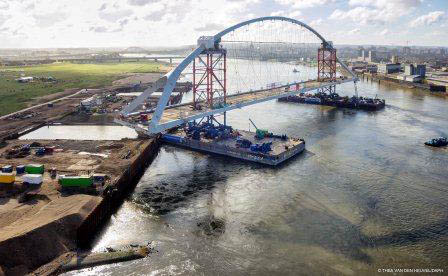 The bridge, named De Oversteek (The Crossing), is the third bridge over the river and its construction was necessary to relieve the expanding city's traffic. The main span of the arch bridge, with a weight of over 7,500t and a length of 280m, was first assembled on site and then lifted about 10m using 16 Strand Jacks SWL 650t. Two barges were positioned under the bridge, which were de-ballasted to gradually take over the load in the Strand Jacks. These barges moved the bridge onto its pillars at a height of 12m.

After a closure of only 10 hours, the river reopened sooner than expected for shipping traffic. More than 10,000 people followed the spectacular operation. This new bridge changed the skyline of this city permanently.

Movie images can be found  here and here. Detailed project information (in Dutch) can be found on the project website.