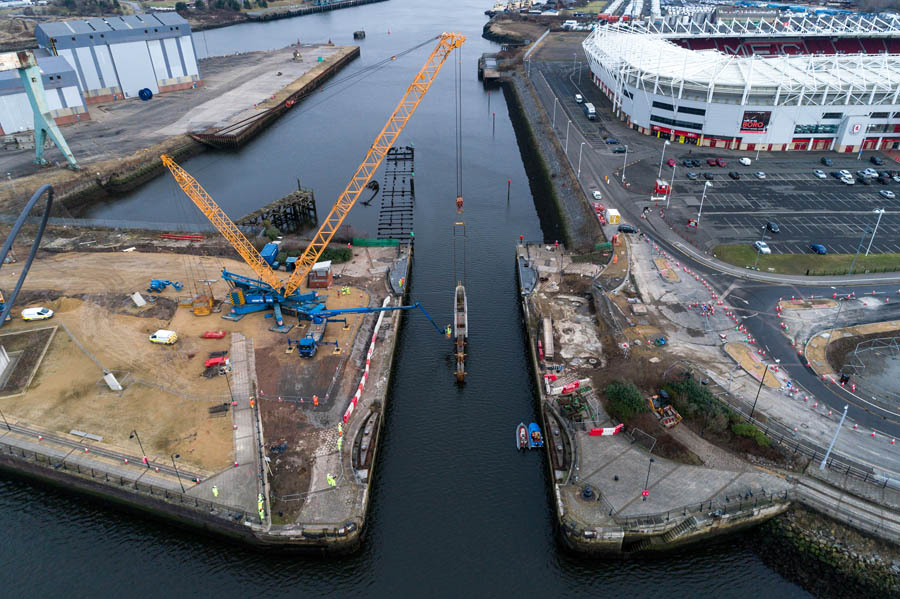 Over the last several months, Sarens has been on site at the new Manhattan Gate Bridge project in Middlesbrough, UK, lifting essential portions of the bridge into place.

The £9m project is an important part of regeneration efforts at the Middlehaven Dock, and is being spearheaded by Arup and Balfour Beatty. The new three-lane bridge is expected to boost local development as well as provide another access point to the Middlesbrough Football Club's Riverside Stadium.

Sarens was on site from mid-December through mid-July to execute several phases of the project.

Next, Sarens deployed the LTM1500 with a 26.5-metre main boom, 35-metre luffing jib, and 165-tonne counterweight to lift 14 skirt units weighing 20 tonnes each, as well as two nose units weighing 34 tonnes each.

In total, it took the team two days to rig the TC3200 and one day to rig the LTM1500. Because the work site is located near the Sarens yard, mobilising equipment to the site was convenient and fast.

To ensure road access during the project, Sarens cooperated with client Balfour Beatty as well as the Middlesbrough Football Club. The project engineer, lift supervisor, and slinger all worked closely with Balfour Beatty to adhere to specific equipment procedures and policies that were well above industry standards.

Sarens project engineer Phil Brothwood, a Middlesbrough football supporter, enjoyed working on this project, and collaborated very closely with the client from the moment the order was received. Both the client and Sarens are pleased with his outstanding performance.