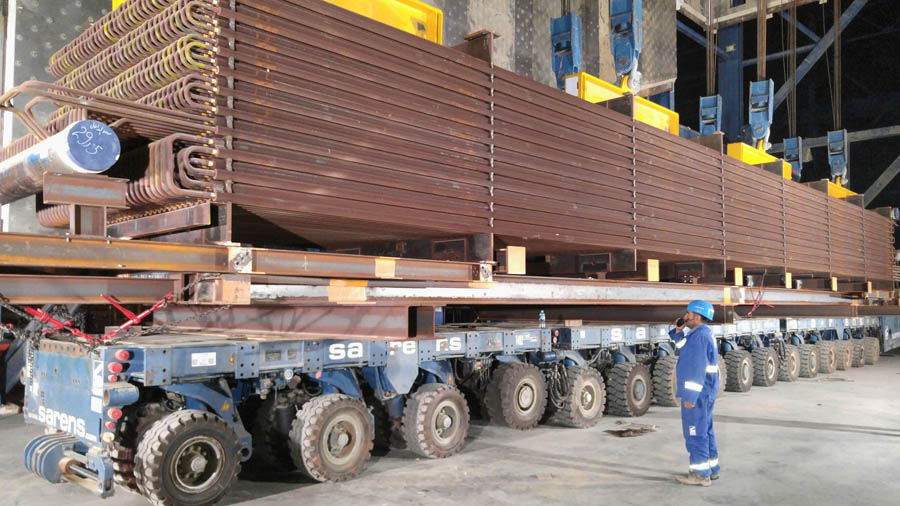 The power plant is a project of Cairo Electricity Production Company (CEPC), and is slated for full operation by early 2018. It is part of the larger Egypt Megaproject, which involves the development of three natural gas-fired CCPPs and up to twelve wind farms by Siemens and the Government of Egypt.

With Siemens as the project lead, Orascom and Elsewedy are performing plant construction. Sarens, in turn, is working with Orascom to transport and lift the modules for this and the other two CCPP projects. This means that Sarens will lift a total of 192 modules for each project over the course of eight months!

The equipment was containerised and shipped from the Sarens warehouse, and then moved from port to site via road transportation, which took about two weeks.

The New Capital power plant needed a total of eight boilers, each consisting of 24 HRSG modules. Sarens lifted a cluster of six HRSGs at a time, each weighing 700t.

The Sarens team had to be precise but quick during the operation, because each boiler had to be completed within 18 days. Sarens accelerated the lifting operation to successfully finalise the first boiler in 12 days (two shifts) and the second boiler in 12 days (extended shift of 12 hours).

Sarens' client, Orascom, was pleased with the team's progress. "I want to thank the Sarens team on site, especially Mr. John Lee, for his professional way of working, good organisation, and full care about doing the job in a very short time and with a high level of quality," said Mostafa Wahba of Orascom.