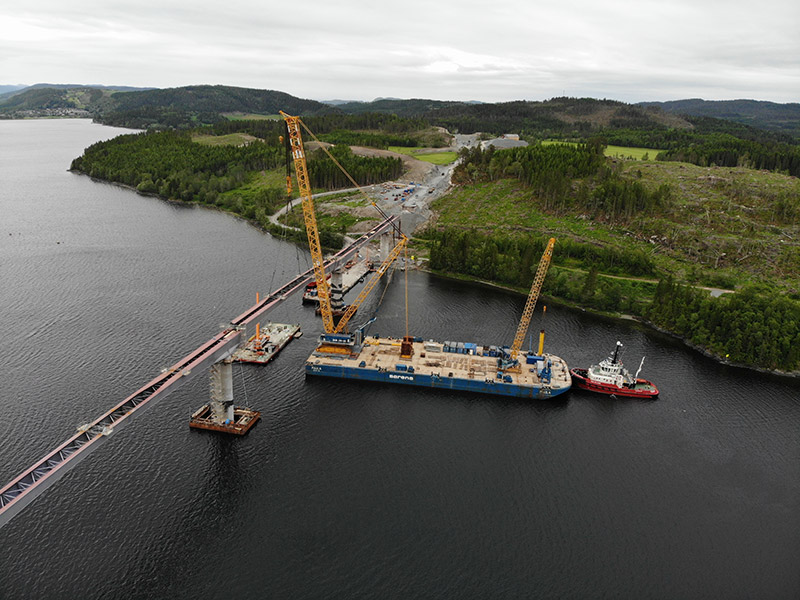 Sarens is proud to announce the installation of another new bridge, this time in Nord-Trøndelag, Norway, over the Beitstad sund between Steinkjer and Verran.

Working on behalf of the Sichuan Road & Bridge Corporation, Sarens crew picked up six pre-assembled bridge segments in Malm, transporting them about 5 kilometres via water to Nord-Trøndelag. The bridge segment dimensions varied between 40-150 metres long and 5,5-15 metres wide, and weighed between 130 and 780 tonnes each.

Sarens deployed the barge Paula and two tugs, Neptune and Balder, for the transport operation. The crew also used 24-axle lines SPMT, a CKE-2500 crane, and a CC8800-1crawler crane (capacity 1.600 tonnes) fitted on the barge to perform all heavy lifts.

This was the first time a CC8800-1 crane had been used to install bridge elements from a Sarens barge, and its capacity and range made it an ideal choice for this operation. It was loaded onto the barge Paula in Gent, Belgium, and towed to Malm, Norway via tugboat, which took eight days. The crane was then configured in SSL MB 84m configuration for the first four lifts, and the main boom was lengthened to 120m for the last two elements.

Sarens used the CC8800-1 to install the 580-metre long bridge in six segments. The crew lifted the first segment on Day 1 and the sixth and final segment on Day 14. The operation was completed within a narrow timeframe of 14 days, as set by the client.

According to Joost Elsen, who oversaw the operation, “Challenges for the lifting were for once not the movement of the crane, but the exact positioning of the barge as we intended to minimise crane movements to only boom up and down to the installation radius.”

Sarens would like to acknowledge the hard work and expertise of all crew involved in this operation, including one site manager, two barge masters, three crane drivers, one lift supervisor, two SPMT operators, and four riggers who assisted in mobilisation and demobilisation of the crane as well as mooring and anchoring of the barge.