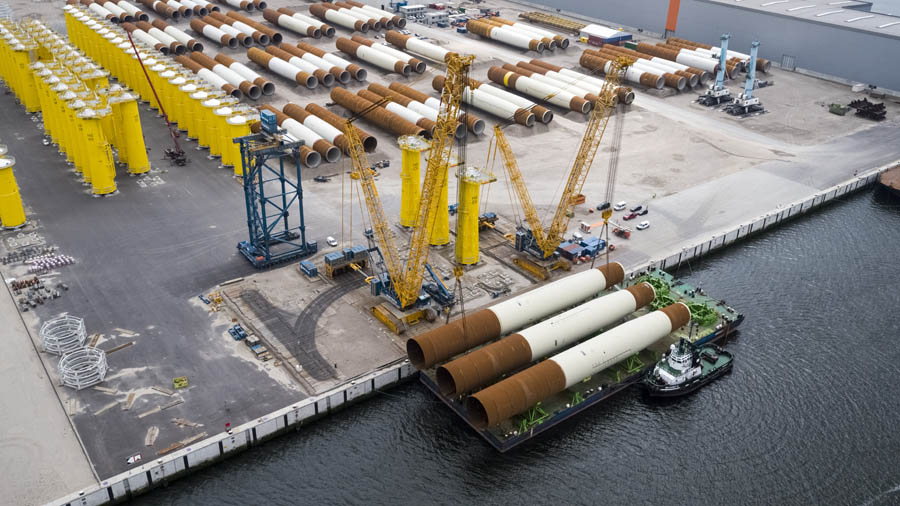 Sarens is proud to be on-site at the Maasvlakte 2 Terminal in Rotterdam, executing onshore logistics for an offshore wind farm operation on behalf of BOW Terminal BV.

Since October of 2017, Sarens has been on site, offloading incoming wind farm modules, transporting and placing them carefully into position on the quay, and loading them out for offshore transport to the North Sea.

The Group is pleased to release a new video of this major logistics operation, which shows how crew members use two of the world's biggest crawler cranes to load in and load out modules weighing over 1.000 tonnes.

As the wind farm transition pieces (TPs) arrive via barge from the fabrication shop, Sarens meets them at the quay with its two enormous crawler cranes: the CC8800-1 and CC6800.

The CC8800-1 lifts each of the 450-480-tonne modules and transfers it to the 500t-capacity TP handler, essentially a 35-metre SMLT tower with one 650t-capacity strand jack and SPMTs. The TP handler then expertly manoeuvres each module to its designated position on the quay, carefully setting it down into position.

When it is time to transport these wind farm modules offshore for installation, Sarens loads them out onto a waiting barge. Both TPs and their corresponding MPs (mono piles) are loaded onto the barge together. Sarens lifts and loads the TPs with the CC8800-1, and then the CC8800-1 and CC6800 work in tandem to carefully lift the MPs. These mono piles weigh between 300 and 1.130 tonnes each, with diameters from 3-8 metres and lengths of up to 112 metres.  For these operations, the CC8800-1 is in SSL 72-metre configuration with SL carrier, and the CC6800 is in SSL 66-metre configuration with SL carrier. They arrived on-site via road, and assembly took four weeks for the TP handler and three weeks for the two cranes. The cranes will both remain on site for the next several months, performing load-ins and load-outs for this major logistics operation.