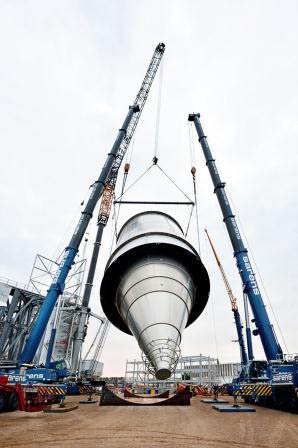 In August Sarens Belgium carried out the lifting of 4 PET silos with weights between 8 and 92t. 3 cranes first lifted the silos onto trailers and placed them at the  destination into steel structures. In April the project "Silo construction "Ellimetal"  began, including the assembly and installation of 3 aluminium silos. One silo weighed  45t and the two largest ones were 92t with a diameter of 13,5m and a total height of  40m. As the silos are built out of different circular sections, Sarens' SCC 1000 lifted  each finished section so it could be welded. When the crane's maximum capacity  of 20t was reached, an LR 1350-LN was added to work next to the Sany crane.  After the vertical assembly of the silos, they were positioned horizontally for finishing  works and transport.