Sarens Home
»
About
»
Projects
»
Kvaerner AS Housing Module Project in Norway
Sarens successfully executes project for Kvaerner AS in Stord, Norway.
10
May 2018 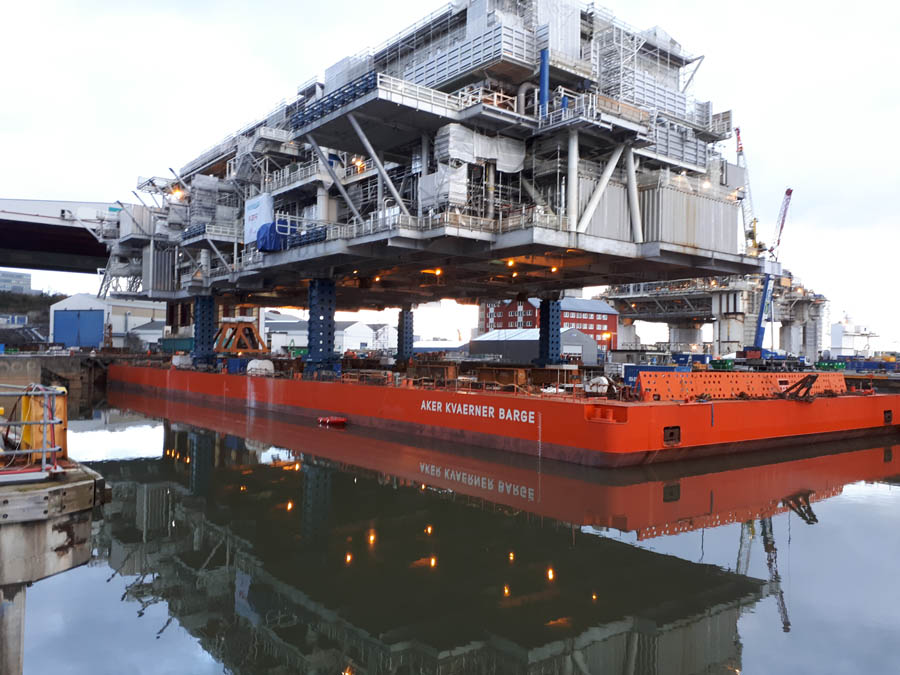 Sarens recently performed the load-out, weighing, and jacking of an oil platform module at a quay in Stord, Norway. The module is destined for the Johan Sverdrup Oil Field in the North Sea, off the coast of Norway. It will be sailed to the field in early 2019, where it will house more than 200 workers (700 if all shifts are present). The platform will include sleeping areas, kitchen, dining room, recreational areas, and utility control systems.

Sarens executed the project on behalf of client Kvaerner AS, which is building the housing platform in partnership with KBR. The project scope included engineering, procurement and fabrication, use of Sarens equipment, and execution of the load-out, jacking and weighing operations. It also required careful management, planning, reporting, and administration on the part of the Sarens team.

For the load-out operation, Sarens transported the 110x61x26-metre module from the fabrication hall to the barge, a distance of approximately 200 metres. For this, the crew used:

Sarens operators then used thirty-two 500-tonne weighing cells to determine the LC-LL module's exact weight, which totaled 12.200 tonnes. Next, they jacked the module approximately 13 metres above the barge deck so the grillage could be installed. For this, they used four towers of CS 5000 jacking systems. At the peak of this operation, Sarens crew numbered 18 people.

Most of the Sarens equipment was mobilized from headquarters by ship, while the rest arrived by truck. It took 20 days to complete the rigging, as the complex surface under the module required a lot of cribbing on the trailers.

"Despite heavy rain and high winds, the operation was perfectly executed according to the project plan," says Project Manager Tor Arne Naess. Sarens congratulates all of the engineers and operators who made this project such a success.