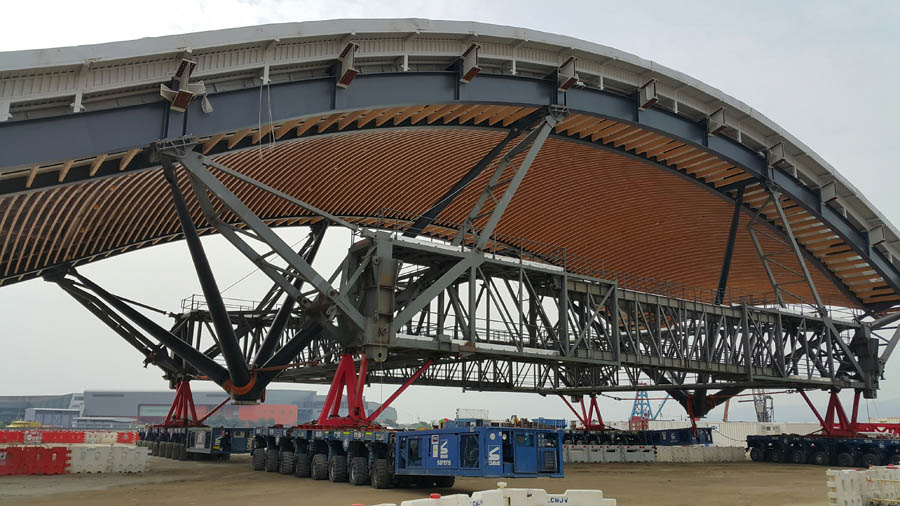 The Hong Kong Boundary Crossing Facilities(HKBCF) is the ambitious project connecting the Hong Kong's traffic network with the Hong Kong- Zhuhai- Macao Bridge(HZMB) directly and effectively. The proposed HKBCF will be located on an artificial island of about 130 hectares reclaimed from the open waters off the northeast of the Hong Kong International Airport(HKIA). Geographically, the HKBCF will be at a convenient location with good transportation connectivity as it is next to the Hong Kong International Airport(HKIA) and near Tung Chung new town. With a variety of transport means including HKIA, SkyPier, Airport Express Line and Tung Chung Line available in the proximity, the HKBCF will become a multi-modal transportation hub in the area. The synergy effect will be considerable and help benefit Hong Kong's overall economic development.

The biggest challenge was the restricted area available, hence the equipment had to be wisely selected. The engineering teams and the operations team studied the dynamics of the site and deployed 4 x 8 axles + 4PP. 4 x 6 axles lines + 4PP were additionally deployed to further accelerate the project. The operation was to be carried out in the safest manner, given the limited space and all divisions of the operation had to be planned well in advance so that the project can be executed without any downtime, any downtime due to unavailability of resources would have turned costly as bringing in equipments was subjected to lot of security checks and were time consuming.

Dimension of the barge chosen were closer to the dimension of the roof section to be transported. The load-out and shifting of roof sections was done at different SPMT orientations, for every transport the orientation of the SPMT had to be changed once the load-out was completed. It was made sure that each load-out was executed as per planned schedule so that the vessel can be cleared of within the stipulated time frame. Due to the nature of the cargo the whole transportation and load-out procedure was to be executed carefully, the four units of 8 axles SPMT in a dolly arrangement were synchronized at all time, so that the structure is stable under all circumstances, any slight change in the configurations would have put stress on the roof structure, which was completely taken care of. Currently, Sarens has executed load-out of six roof sections. Moreover there is a constant threat of Typhoon approaching the project location, but our skilled and qualified team of ten are working efficiently to complete the load-out of all the 81 roof sections at a swift pace aligned to all safety parameters.