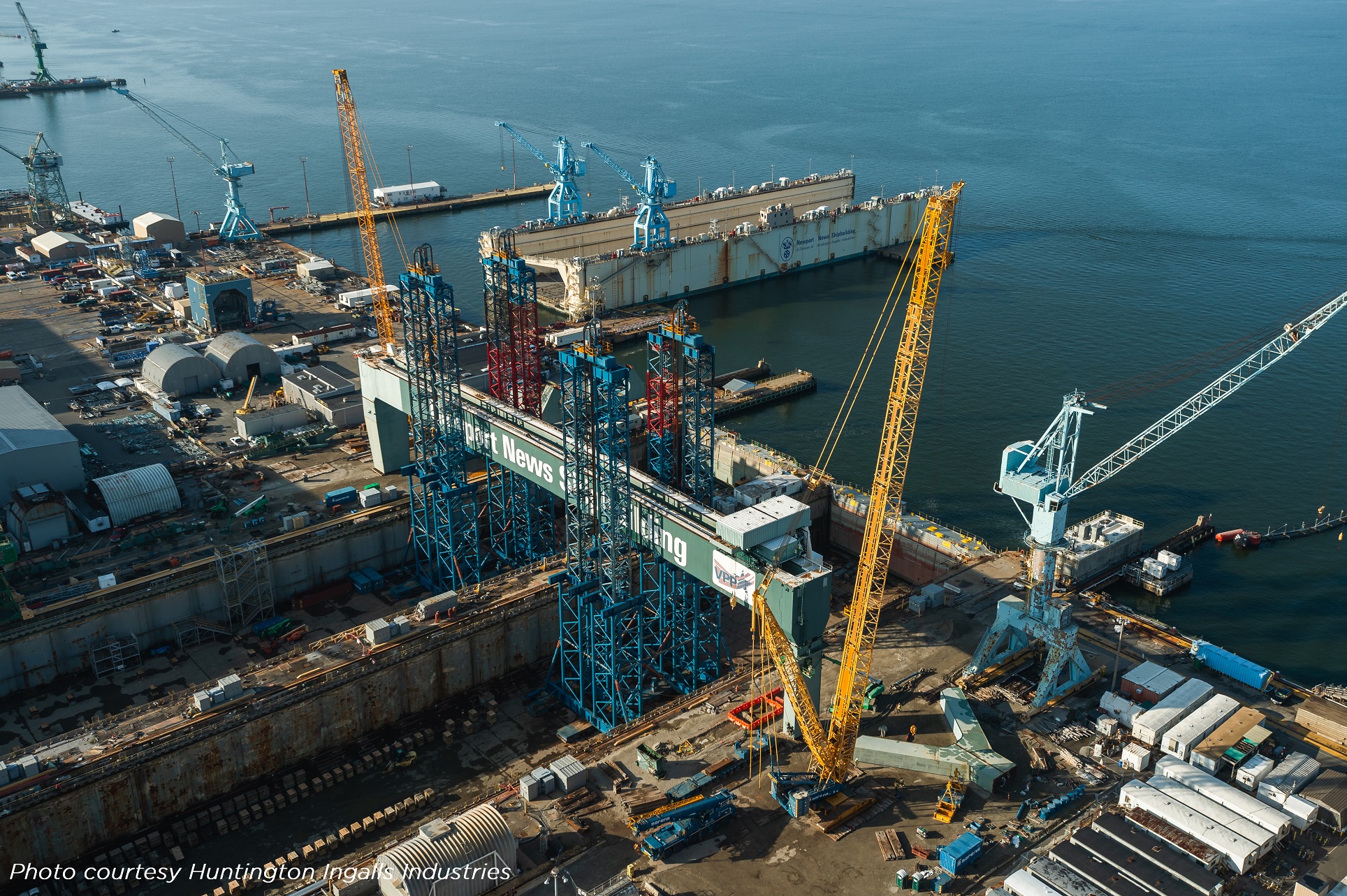 Sarens was commissioned in 2019 to demolish a ‘Goliath Crane’ – Crane 32400 at the Newport News Shipbuilding in Newport News, Virginia on the US East Coast, where this crane has dominated the skyline for decades. The operation was scheduled from March 2020 to September 2020.

The Newport News Shipbuilding site is the shipyard dedicated to the US Navy, building new fleet, and providing maintenance support to the US Navy fleet of aircraft carriers and submarines. Crane 32400 sits over two parallel docks, with a central wall and has a span of 134m, a hook height of 50.5m, and a lifting capacity of 310LT. The total weight of the crane is estimated at 2200T. Access to the crane was fairly limited and the actual work zone restricted to well-defined areas, as the demolition had to take place in parallel with the preparation of the docks for the next aircraft carrier to come in immediately without interrupting the shipyard activities.

The team had to address the specific requirements of the client:

The demolition of the 32400 Goliath Gantry Crane began in August 2020. After cutting the boogies loose, the 32400 crane was crane lifted and the boogies moved out using the crawler cranes. The boogies were loaded on SPMT and transported to a staging yard to clear space. In 3 more steps, removing the sill beams, the lower leg sections, and the upper leg sections, the main girder was lowered to the ground level. Every step ensured that the crane was secured against high winds due to Hurricane Laura.

Once the main girder was lowered down, adequate load spreading was installed to set down and release the strand jacks.  Immediately the lifting system was dismantled and assembled for the next phase of the demolition. Simultaneously, the available crane parts including the boogies, sill beams, and leg sections were loaded-out on the barge using SPMTs and transported 10 hours upstream where they are offloaded and set down on the staging area to be finally scrapped.

As the lifting system was completely dismantled, both docks were filled with water.  In each dock, a barge equipped with supporting girders was positioned under the main girder. Both barges were ballasted to take the load of the main girders. Finally the main girders were cut in the middle and each of the half-girders rotated 90 degrees on the barge and set down for evacuation to the staging area for scrapping.

According to Steven Sarens, Senior Vice President, North America, “It was a truly fascinating experience to be able to walk around the site with a huge historic importance. And not often one gets a chance to get close to an aircraft carrier!” He added, “It is needless to say that the onsite restrictions due to the aircraft carriers and submarines did add an additional challenge to the operations”. “Our meticulous planning and execution made sure that the demolition of the iconic crane was completed smoothly and within the mentioned timeline.”