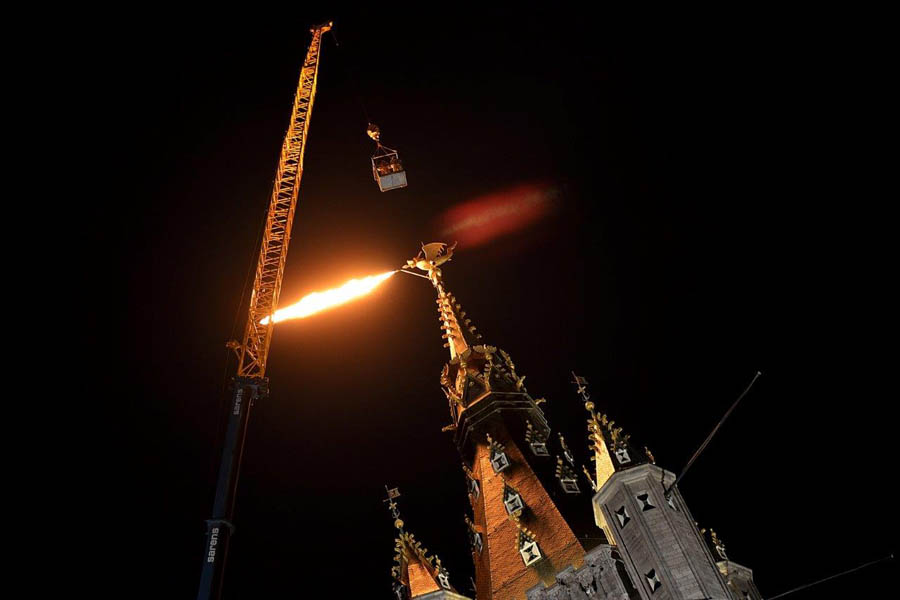 Stad Gent roped in Sarens, the specialists of heavy lifting, to install the artificial fire system in the dragon on the belfry of Ghent.

The 91-metre-tall belfry of Ghent is one of three medieval towers in the heart of Ghent. It's the tallest belfry in Belgium and also part of the UNESCO's World Heritage List. To mark the 175th year of the Ghent festivities, it was decided to light its top, precisely after 199 years.

Sarens decided to deploy its LTM 1300-6.1 TF 35 m to carry out the operation. The crane was transported at night from our yard in Wolvertem to the site and rigged in three hours. After drone scans and laser scans were completed by the land surveyor, two of the technicians in a man basket were lifted by the LTM 1300-6.1 to a height of 91m where they installed the customised fire system in the mouth of the dragon.

Planning Manager, Sales, Hans Sarens remarks, "Being a Belgian company, we are proud to be associated with a historic event of our country and safely complete the operation. Directeur, Dienst Evenementen, Feesten, Markten en Foren, Stad Gent, Jeroen De Schuyteneer adds, "I would like to express that your crane operators are formidable guys in terms of thinking and interaction on the ground. It is a pleasure for all the different technicians to work with them."