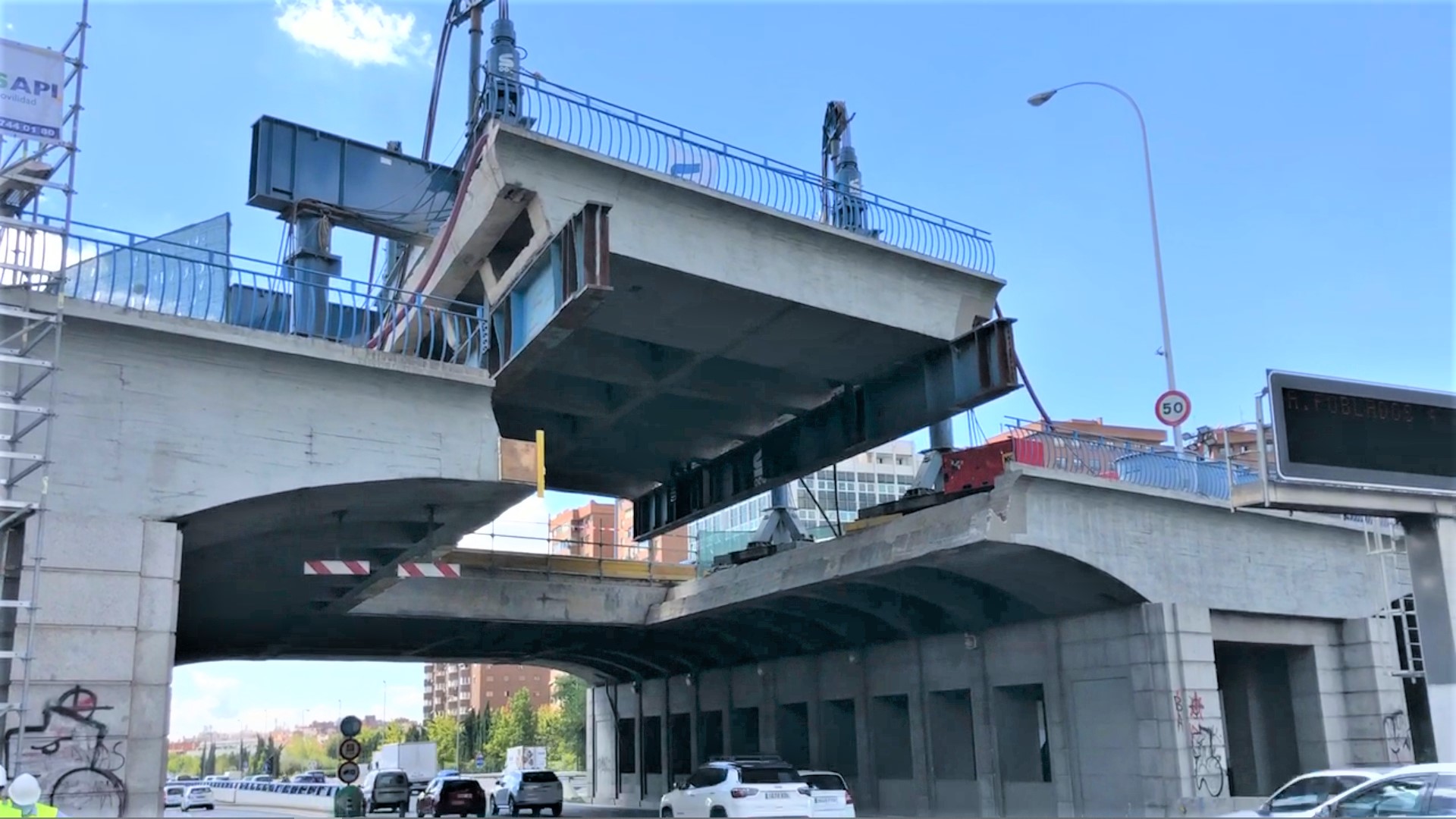 Sarens participated in the repair of the damaged spans of the north deck of the bridge Avenida del Mediterráneo, over the M-30 belt in Madrid, Spain at the exit to the A3 towards Valencia. The project was carried out in two non-simultaneous phases that corresponded to the lifting of each of the two affected spans, using hydraulic jacks located on the auxiliary lifting gantry of Sarens.

These rehabilitation works are critical considering the poor condition of the infrastructure that crosses the M-30, through which hundreds of thousands of vehicles circulate daily, since its construction in 1954. Damage at the bearings caused mainly by rain made it necessary that in addition to replacing the pavement, Sarens services are required to lift the affected spans of the bridge and repair its bearings.

The deterioration of the internal part of the supports (with no access for maintenance works), had already been reported for 15 years, and for which external waterproofing tasks were carried out.

Sarens also participated in 2016 in the project study, proposal of alternatives execution for the repairs of the south deck of the same bridge, for TECYRSA.

Sarens' experience in similar projects helped the development and choice of this lifting technique, compared to the use of cranes or crawling equipment from the M-30 carriageway, as it is the most appropriate for repairing this type of bridge.

The heaviest span of the bridge to be hoisted weighed 375 tonnes. The Sarens lifting gantry with its four hydraulic jacks was designed to lift up to 500 tonnes.

The spans was repaired from the beginning of August to the end of September. The difficult lifting operations were completed with great agility thanks to the cooperation between all the parties involved, just in the estimated time for the project.

The main operations were carried out mainly at night, trying to cause the least impact on the traffic on the bridge itself and the residents of the area, by also having to cut the circulation of the affected lanes on the M-30 in order to prioritise safety in the project. Thanks to the agility of this method used by Sarens, the limitation of circulation has been only a few weekend nights in the first belt of Madrid, avoiding invading the road and working intensively for several days in a double shift of day and night.

The rehabilitation of this bridge allows the safe resumption of circulation in one of the traffic dense areas of the city, the M-30. “We are very pleased to have completed this sophisticated project in such a short time. We are convinced that our work helps to make the mobility and traffic safer on the ring road with the greatest influx of the city of Madrid ”, commented José María Martínez, Key Account Manager of Sarens.