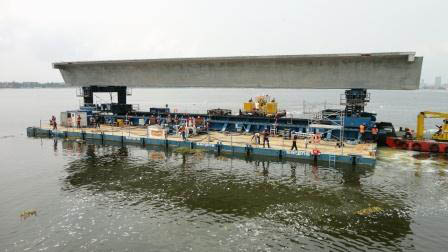 Sarens collaborated in the first bridge project after the end of the war in Abidjan, Ivory Coast. This bridge links the city with the airport and measures 1.5km in length. It consists out of 30 spans, all made out of  2 pre-constrained 1,000t concrete beams. The beams were made on site and then installed by Sarens. First  the beams were skid transversally to place them onto Sarbogies. Next they were moved by the bogies and  thus loaded onto a modular container barge (Sarens Modular Barge). The last step, after being jacked up by  CS 250, was the installation of the beams onto their piles. All 60 elements with a weight between 979t and  1,026t will be installed this way.

Innovation Sarens Modular Barge (SMB)
During this project Sarens used its brand new Sarens Modular Barge (SMB) for the fi rst time. This modular barge consists out of 20' and 40' units which can be connected to adapt to the size of a  channel or the width of a lock. The modular structure also allows for a cost-effective mobilization  thanks to the certifi ed container sized dimensions of the modules, which makes them stackable just  like containers.  Sarens Modular Barge is in-house designed  by Sarens' engineering team to be used for all  kind of inland water operations. SMB makes  it possible to perform barge operations in  waters that are difficult to access by  waterway, for example lakes or inland rivers.  Furthermore Sarens Modular Barge possesses  very high structural capacities compared  to other alternatives.

Innovation Sarbogies
Another innovation used for the first time during this project is Sarbogies. Thanks to its  high concentrated capacity and a nominal load  of 600t, this is a new alternative for skidding.