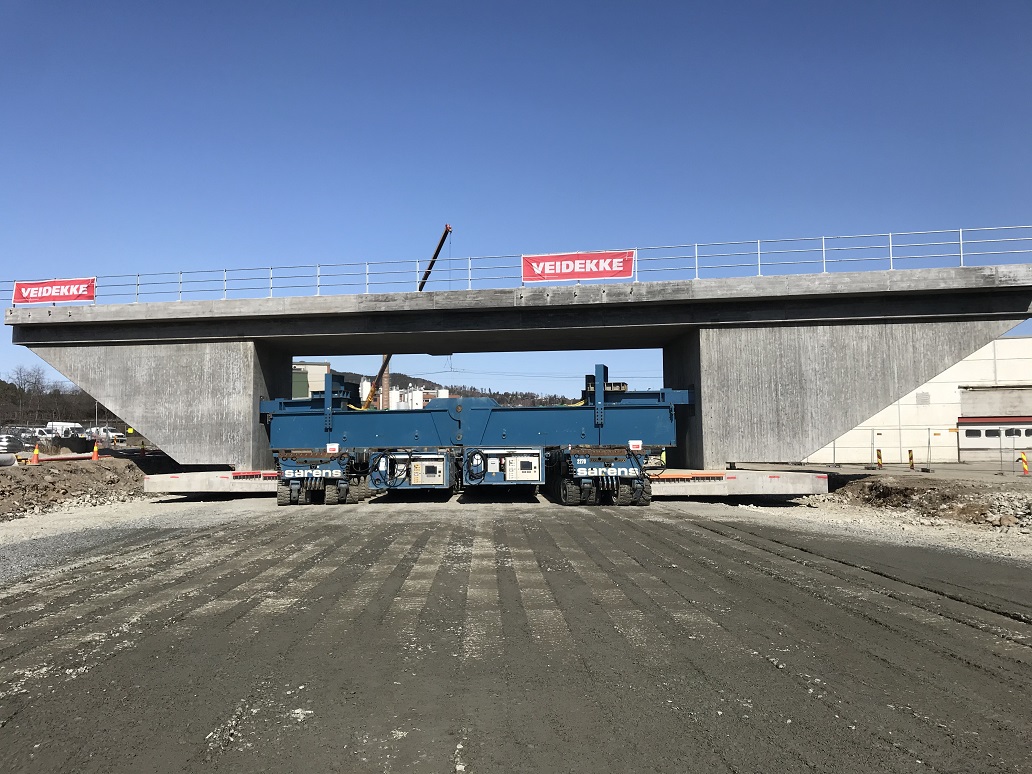 How long does it take to install a concrete railroad crossing? Sarens has such feats down to a science, and recently used its SPMTs and engineering expertise to pull off a complete installation within just 34 minutes!

Sarens had teamed up with client Veidekke Entreprenør AS to support their work on the 2,3 billion NOK highway extension project managed by NyeVeier on behalf of the Norwegian government. The highway connects key regions of Norway, including the cities of Oslo and Trondheim.

As part of the expansion project, Veidekke Entreprenør had constructed a 1.100-tonne concrete railroad crossing culvert next to the tracks in the centre of the town of Brumunddal. Sarens was then responsible for moving it from the construction area and into its final position.

The timeline for this operation was particularly sensitive, as the railroad owner had allowed only a 93-hour window from the time the last train used the tracks to the time the next train was scheduled to pass. This window included time allocated for all civil works, leaving Sarens with a brief two-hour time slot for transport and installation.

This left no room for error. Working closely with the client, Sarens performed a detailed engineering study to ensure that all details were accounted for and to minimise the risk of any delays or incidents. The client implemented modern tools, including 3D scanning and real time 3D modeling, as part of this process.

When the time came, Sarens transported the culvert using 38 axle lines of Kamag K24ST SPMTs alongside in-house developed MB1500x1000 modular beams and CL500 cantilever beams, which were positioned in recesses along the culvert walls. This allowed for quick setup and removal after the culvert was placed in its final position, and made it possible for Sarens to install the structure with millimetre precision.

The operation took place in mid-April of 2021, and Sarens adeptly transported and installed the culvert, removing all equipment and personnel from the area, in only 34 minutes! The first train passed two days later.

Congratulations to everyone who was involved in this time-sensitive and demanding operation. Your hard work, precision, and detailed planning have made this project a resounding success.