Sarens Home
»
About
»
News
»
The Impeccable Makeover of the Schierstein Bridge under Freezing Temperatures
A major stage in the construction of the new Schierstein Bridgewas accomplished by Sarens recently.
29
March 2016 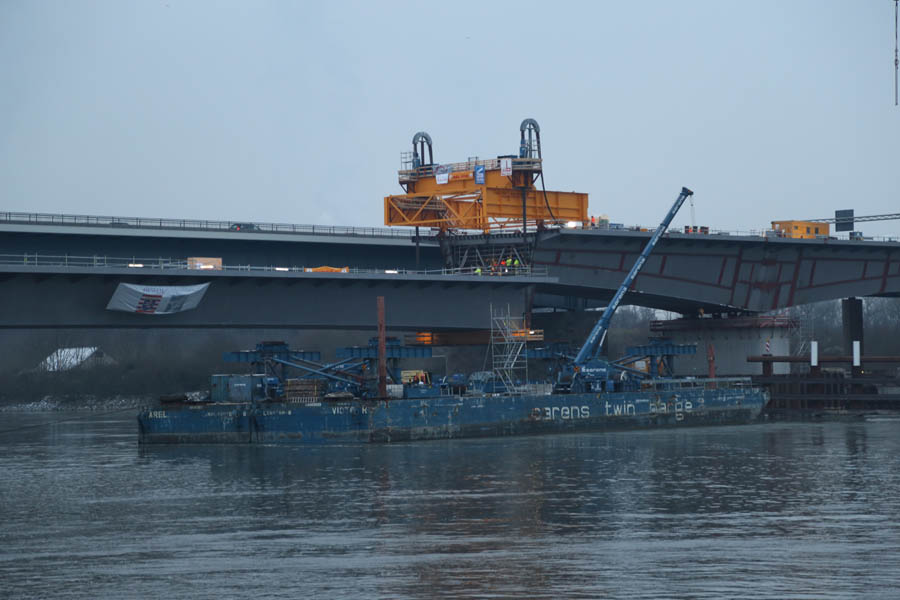 Under freezing temperatures, our project manager, Carl Sarens, floated a 120 metre long 2000 T section into place using the Karel/Victor twin barge. Now this structure already spans the river branch between the Rettbergsaue wetlands and the Hessian side.

The old Schierstein Bridge is a 1282 metre long bridge with a total of four lanes on which the motorway A 643 crosses the Rhine. The bridge was opened on 13 December 1962 and consists of six sections (of which one hundred metres are made of pre-stressed concrete). It was built in the period from 1959 to 1962. Located at marker 504,400, it is the third road bridge to span the Rhine besides the two upstream bridges, the Theodor-Heuss-Brücke and the Weisenauer Brücke (A60).

A landmark donated by the Wilhelm Dyckerhoff Institute in Wiesbaden is located on the bridge and shows the coats of arms of the German states of Hesse and Rhineland-Palatinate. Due to the location of the bridge, the two federal states agreed that the Hessian state administration should take charge of the Schierstein Bridge's maintenance. This will fall under the responsibility of the Hessen Mobil - Road and Traffic Management in Wiesbaden.

An expert report produced in 2006 marked a turning point in the history of the bridge. Since then, it is no longer considered to be capable of rehabilitation and only has a provisional remaining useful life till 2015.

It thus became necessary to build a new bridge. For this purpose, a competition for its realization took place in 2007.

How is the construction work to be carried out?

The distance between the bridges is not constant. On the Mainz side, it measures 18.75 metres due to the position of the roadway transition determined by the existing Mainz-Mombach down ramp. Finally, six lanes will ensure a smooth traffic flow.

An important milestone was reached on Tuesday by floating the 120 metre long 2000 T section into place. Under freezing temperatures, Sarens' Karel/Victor twin barge and 2 x 2 850 T of strand were used, among other equipment. These will hold the bridge section in place until completion of the welding work foreseen for the end of the month.

The Sarens team led by Carl Sarens is proud of having contributed to an efficient and modern link between the two state capitals, Wiesbaden and Mainz.