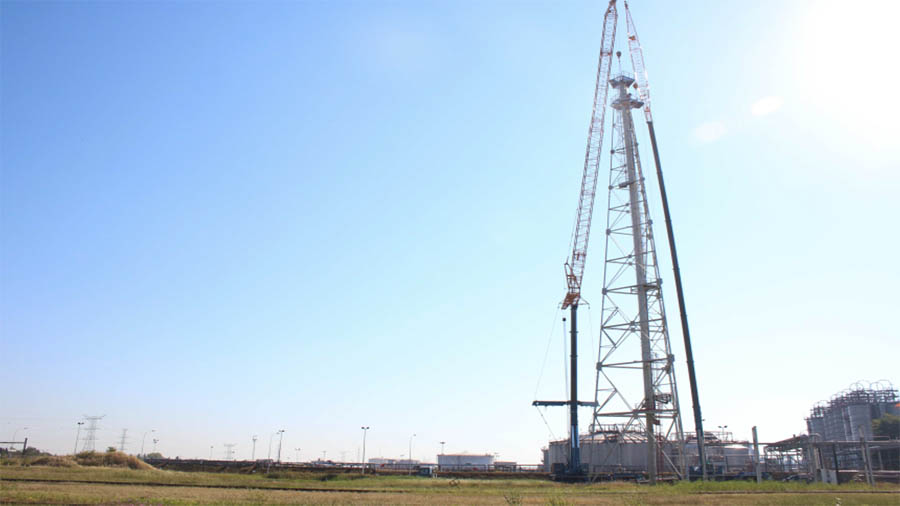 Ineos Geel facility, having a production capacity of PP 300kt, is located 45 km east of Antwerp. Some sections of the facility are undergoing modernization to enhance the production capacity and ensure the safety of the workforce and the environment.

Koole NV, the wrecking and demolition service provider, was assigned the responsibility to dismantle one of the chemical plants on the Ineos site in Geel, Belgium. As part of the dismantling drive, some docks, a truck-loading dock, parts of a production building, silo construction units, and smaller production installations will be removed. The key task of the project involved the dismantling of a 76m high flare stack. The project began in mid-August 2016 and is expected to be completed by the end of the year.

As part of the project, Sarens was required to dismantle the 76m high flair stack, including the analysis of the equipment to be deployed and all lifting works involved in the dismantling. The engineering team shortlisted Liebherr LTM 1400-7.1_TN63m and Liebherr LTM1300-6.2_TF21m to undertake the task.

The flair stack section weighed 10t and measured 76m in height and had a radius of 48m.

The cranes were transported to the project site in one day. The bad soil conditions next to the road and a limited area available to build up the luffing jib added a challenge during the rigging of the crane.

The two Liebherr cranes in set configuration together performed the lifting of the flair stack parts. Since the distance between the two cranes was small, our crew synchronized them to avoid collisions between the two boom segments of the cranes.  The high wind velocity further added to the challenge.

Though the job was targeted for completion in three days, but the meticulous planning, quick rigging, and efficient operations led to the completion of the task in two days. The Inoes Geel site is particularly known for its strict safety principles and Sarens team efficiently completed the task, a day in advance, with all safety parameters aligned. The client was pleased at the project execution and congratulated the team on successful completion of the project.