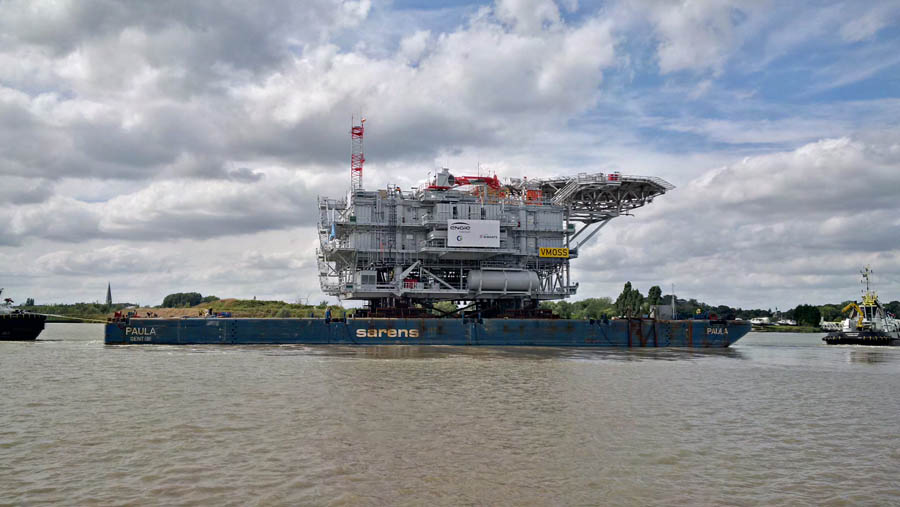 Veja Mate is a 402 MW, 1.9 billion EUR offshore wind project owned by the Highland Group Holdings Ltd, Siemens Financial Services and CI II managed by Copenhagen Infrastructure Partners. Construction started on the 4th of April 2016 and the project is expected to be fully operational by the end of 2017. It will produce over 1,6 TWh of green, renewable electricity annually, equivalent to the annual consumption of 400.000 German households.

The sophisticated and heavy topside module weighed approximately 2500 tonnes, measuring 61m in length, 33m in width and 28.5m in height. Sarens deployed its reliable and efficient Barge Paula and 80 axle lines Self propelled modular trailers (type: K24ST) along with an external Ballasting system and Hydraulic winches to carry out the load-out and transportation of the module.

The load-out was carried out from the Hoboken facility of Fabricom onto the Paula Barge placed over the river Scheldt. It was a challenging task to perform as the load-out took place on the river section where there was a tidal difference of +/-6m. Therefore it was critical to safely transfer the heavy module onto the barge by perfectly balancing the weight.

The module was transferred to Paula very slowly using SPMT's and bridges that connected the barge to land. The barge was ballasted tactfully, taking over the weight from land, to keep it at level as more weight was being shifted from land to barge.

A total of 8 specialized crew members completed the task. Subsequently the Paula barge successfully transported the topside module to the Veja Mate site for installation.