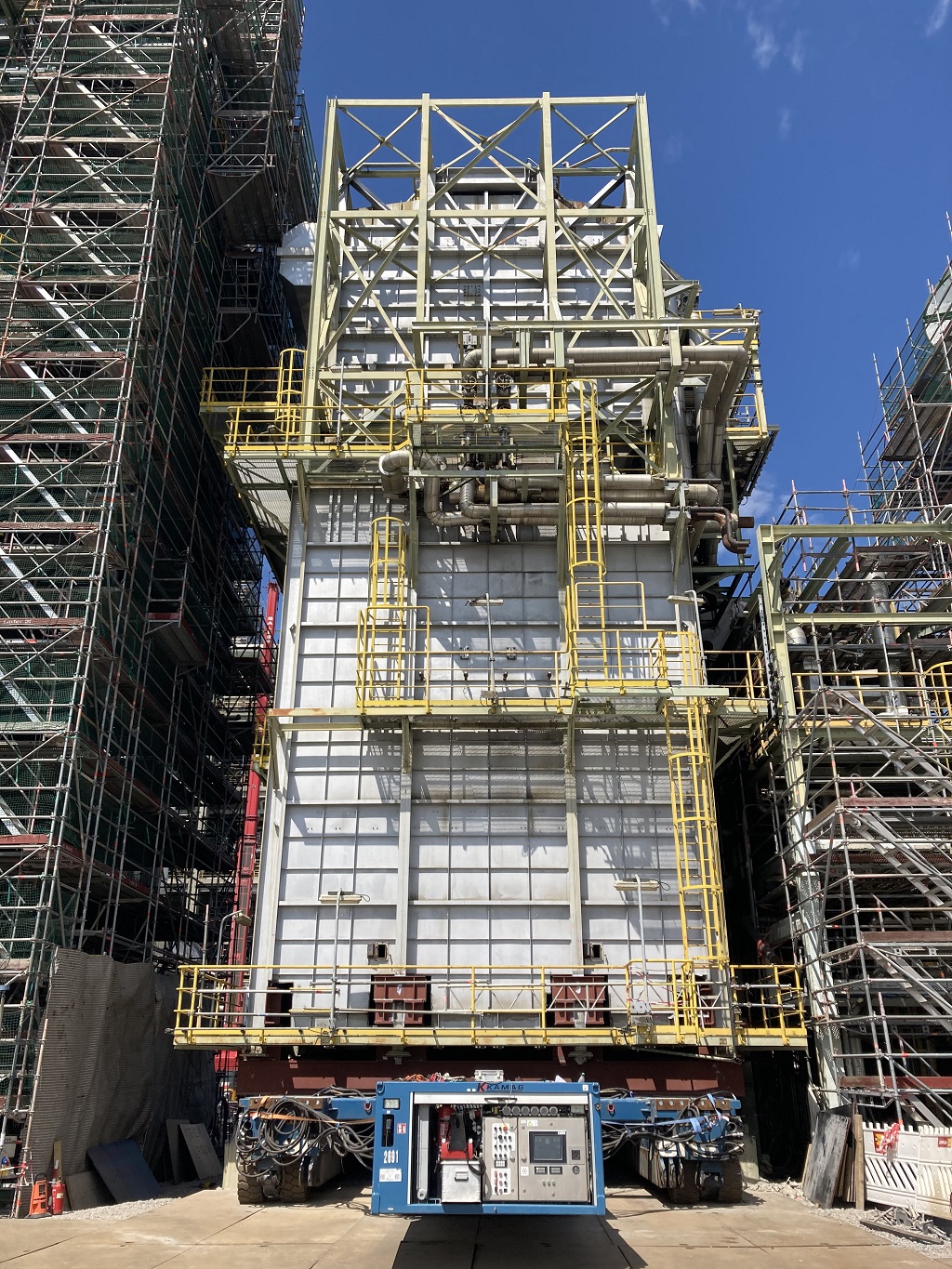 When customer NAFTO needed to transport an old heater at the Total refinery in Leuna, Germany, they turned to Sarens for help. From May to June 2021, Sarens successfully moved the 580-tonne heater from the production site to a dismantling area. In addition, Sarens also transported an old soaker, new soaker, and two pipe racks.

The transport of the old heater marked a critical milestone for the turnaround of Total Refinery Mitteldeutschland Leuna. The project involved many different people from different countries, all working together to coordinate the operation. It also happened to coincide with the beginnings of the Covid-19 pandemic, leading to delays and the necessity of rescheduling not only meetings, but transport operations.

Because the concrete columns supporting the old heater provided limited space between columns, a special SPMT configuration had to be engineered. This solution resulted in a unique SPMT configuration consisting of a K24ST 12L trailer and PPU combined with a K24ST 10L stretch trailer. The stretch trailer was split in half, with each half connected to a side of the centre 12L trailer with mechanical coupling blocks.

Moreover, since the concrete columns supporting the old heater were in the path of the trailers’ mechanical coupling blocks and hydraulic hoses, the trailer needed to be inserted step by step. The four-member Sarens crew would have to disconnect and reconnect the coupling blocks and hoses as they progressed underneath the heater.

The necessary equipment, including SPMTs and auxiliaries, was brought to the project site from Sarens HQ via six trucks that travelled a distance of 700 km. Offloading and assembling the special SPMT stretch configuration took two days.

Because this was a first-time SPMT configuration to be used during an important refinery turnaround, it was important for the SPMT configuration to perform without any failures or missing parts. To ensure a smooth operation, Sarens organised a test SPMT set-up at headquarters, checking all parts and functionalities before mobilising the equipment to the site.

Once the equipment reached the Leuna refinery, the SPMTs were installed underneath the old heater, taking over the weight from the concrete support columns. The client then demolished the columns to make way for transportation to commence. This demolition was performed with extreme care so as not to damage the loaded SPMTs.

With the columns removed, Sarens carefully drove the heater out of its production zone with mere centimetres of space on each side of the surrounding scaffolding. Because the cargo had a high centre of gravity, a route study had been done before transport to make sure all obstacles were removed and roads closed to prevent clashes. The transport proceeded without any disruptions, bringing the heater safely and successfully to the dismantling area.

“You made the transport seem so easy, driving the heater out of its place,” said Krysztof Batory, project manager for NAFTO Poland.

Sarens was proud to complete this project successfully, especially during a busy turnaround with approximately 3.000 workers and many contractors working on the same site and adopting new safety procedures during an evolving Covid-19 pandemic. Matthias De Weerdt, Technical Project Leader, Sarens adds, "The smooth execution of the project was possible due to the successful cooperation between Sarens and NAFTO for which we are very thankful to NAFTO."