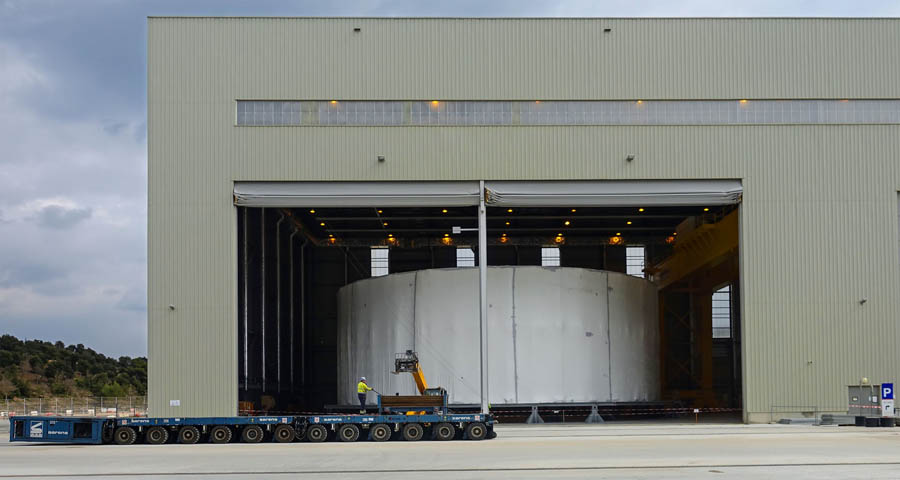 April 2019:  The ITER cryostat is the largest stainless steel high-vacuum pressure chamber ever built (16,000 m³) and provides the high vacuum, ultra-cool environment for the ITER vacuum vessel and the superconducting magnets. Manufactured from stainless steel, the cryostat weighs 3,850 tonnes. Its base section, weighing 1,250-tonnes, will be the single largest load of ITER Tokamak assembly.

Sarens was commissioned by ITER to perform the transport of the lower cylinder of the cryostat weighing 590T in Saint-Paul-les-Durance, France. To move the load and turn it on sharp angles the team decided to deploy a combination of SPMTs. The SPMT axle line configuration was determined by the structural strength of the transport frame. Initially 4x 6L + 4x PPU were foreseen for this transport, but to have sufficient support for the frame, this had to be increased to 4x 12L + 4x PPU. Additionally, they needed to be orientated at 90 degrees to each other to support the lower cylinder at its circumference. Limited space was available to maneuver and install the trailers underneath the transport frame due to the low height and congested assembly area.

All the SPMTs were transported by normal trucks and took two days for offloading, assembly, and installation.

The weight of the lower cylinder was around 380T and its transport frame an additional 210T, making a total transported weight of around 590T. The lower cylinder had a height of 11m and diameter of 29m. Our team of three carried out the transport safely in a single day moving the cylinder smoothly and turning it impeccably at the sharp turns.