Sarens Home
»
About
»
News
»
Sarens Transports and Installs the Boston Barrier
Sarens performs the transportation and installation of the 290T Boston barrier which reduces the risk of tidal flooding in Boston.
30
January 2020 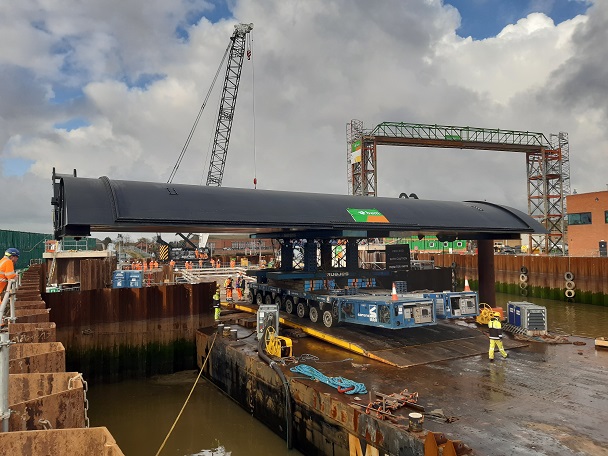 The Boston Barrier installed across the River Witham (or Havne) will help protect more than 14.000 properties making Boston one of the best protected towns against tidal flooding on the east coast. A new control building will operate the barrier and there are flood defence walls on both banks and replacement gates across the entrance to the existing Port of Boston dock.

Sarens was commissioned by Hollandia Infra to transport the Barrier from Krimpen aan den Ijssel, the Netherlands, where it was fabricated, to Boston and finally install it.

Extreme current due to the tidal work on the river had to be incorporated during the planning phase. The client had created a temporary bridge to install the barrier to its final position which had to be lifted along with the Barrier. Considering all the points our teams decided to deploy SPMT’s, supports, load spreading mats, modular beams, and PJ250.

The installation site was near a residential area, leaving a very confined space. The team unloaded the equipment on a laydown area, 2 streets away from the final jobsite. Heavy rains added to the challenge.

Once the Barrier, weighing 290T and measuring 30mx10mx3m, was moved to the installation site along with the temporary bridge structure it was safely jacked up to its final position.

According to the Project Manager, Willem Ditmer, “The client was very impressed with the performance of our team and the precisely chosen equipment that fitted like a glove on this job.”