Sarens Home
»
About
»
News
»
Sarens Taps into The Remarkable Potential of The Wind Sector in India
Sarens India division deploys one of the finest fleet of cranes with a highly skilled team to make a mark in the growing wind sector in the country.
22
November 2016 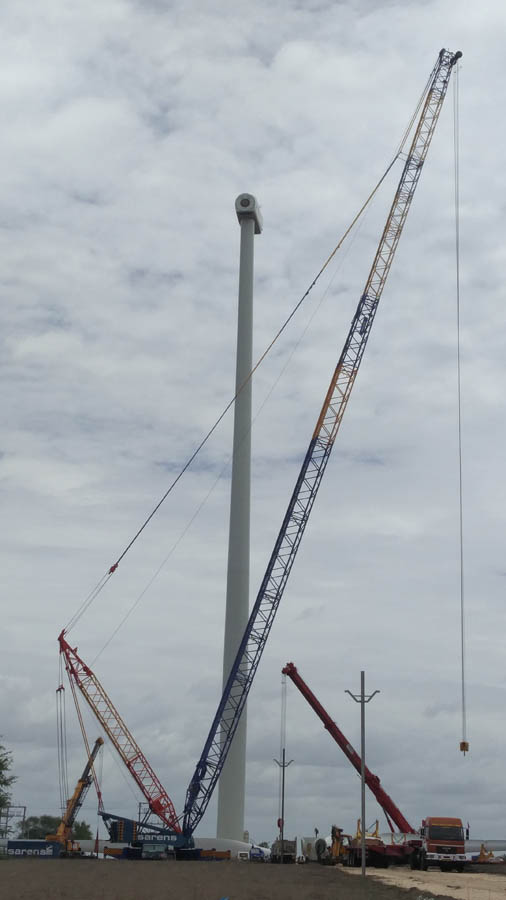 The development of wind power in India began in the 1986 with first wind farms being set up in coastal areas of Maharashtra, Gujarat, and Tamil Nadu with 55 KW Vestas wind turbines. Although a relative newcomer to the wind industry, compared to Denmark or the United States, India has the fourth largest installed wind power capacity in the world. In 2009-10, the growth rate was the highest among the other top four countries including China, the USA, and Germany. As of August 31, 2016, the installed capacity of wind power in India was 27.7 GW, mainly spread across southern, western, and northern regions.

Currently, India is a very promising and demanding market. It is set to grow by 30 per cent annually. In 2016-17, the country will add about 4.3 GW of wind power. Most capacity will be added by Andhra Pradesh followed by Gujarat, Madhya Pradesh, Karnataka, Rajasthan, Maharashtra, and Tamil Nadu. The year 2015-16 was characterized as a historic year for the Indian renewable industry. Wind energy surpassed all its previous records with about 3.3 GW installation, a growth of 43 per cent, propelled by technology and favorable towards  environmental policies for renewables, by central and state governments.

Witnessing the exceptional growth of the Indian wind sector in 2015, Sarens entered this market bringing along an international experience of successfully executing projects in the wind sector. With diligent sales efforts, the first order of major wind project came in March 2015 from Gamesa corporations with the entry of three CC2800-1/TC2800 cranes. Gamesa wind turbines, is a leading international wind turbine manufacturer. Headquartered in Spain, Gamesa entered India in 2009 and has so far installed over 3.0 GW and services close to 2.8 GW under operation and management agreements. It is also the fourth-largest wind turbine manufacturer in the world.

Later, the crane wind configurations were added on all 600t cranes deployed in India and now all the five units are equipped with LF2/S7 KITS to do installations of up to 120m hub heights. In 2016, Sarens also ordered another twenty support cranes of 160/100/70/50t capacities to be supplied to our clients in India.

Our operations in India, has had the reputation of being very safe. We now have a specialized team of experienced and trained operators and riggers who can assemble and dismantle a 600t crane in maximum 36 hours.

In 2016, we also added two more wind cranes in CC2800-1 to our fleet and with five CC2800-1 and one TC2800 we are fully equipped to efficiently cater to the needs of our clients. The peak of the installation season starts in November and lasts until April. On an average, Sarens in India installs 8 MW per month per main crane, with 6 main cranes reaching up to 48 MW installations per month, making us reach to a market share of  7-8% of wind market in a span of 20 months.

Gamesa Wind Turbines Private Limited, GE Wind Energy Limited, Inox Wind Limited, and Suzlon Energy Limited are some of the major clients Sarens has worked for in the region. Sarens cranes were successfully deployed at two of the world's top ten onshore wind farms located in India: the 1.5 GW project in Muppandal, Tamil Nadu and the 1.1 GW project in Jaisalmer, Rajasthan. Managing Director, India, Navneet Jain, points, "In just 18 months, of wind operations in India, Sarens has become the preferred crane supplier in this wind market."

"We look forward to adding more wind specific SL3800/LG1750 cranes in the year 2017 to meet the expected challenges of increased hub heights and nacelle weights. We are also looking into adding a special wind mechanical installation team based in India to serve the Asian markets and worldwide opportunities", said Regional Director Sales, Asia-Pacific, Manoj Thomas.