Sarens Home
»
About
»
News
»
Sarens Soccer Pitch Installs 89 Monopiles at the Wind Farm Fryslân
Sarens provides engineering and supply of a combined assembled barge spread and the PC6800 crane for the installation of 89 monopiles at the Windpark Fryslân.
9
February 2021 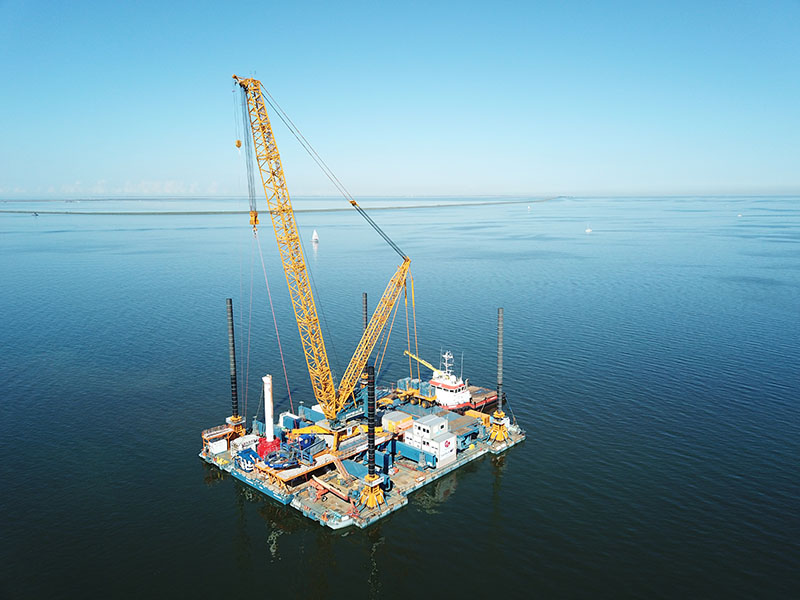 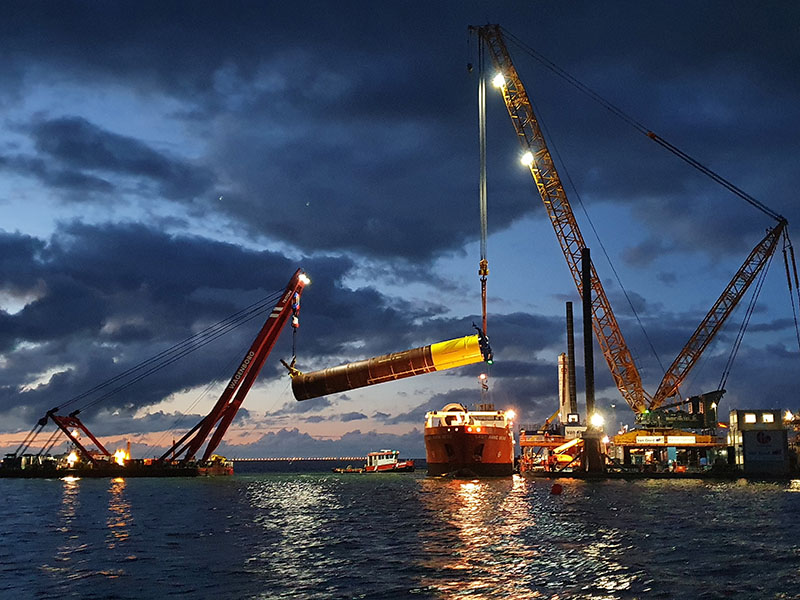 A unique wind farm on the biggest lake of the Netherlands, the Ijsselmeer, will be the largest windfarm built within inland water in the world, comprising of 89 turbines of 4.3 MW. With a capacity of 382.7 MW, Wind farm Fryslân will produce enough energy to supply approximately 500,000 households. The shallow waters of the “IJsselmeer" and restricted access to the lake by narrow locks called for a unique solution.

Sarens was commissioned to lift and install monopiles (maximum weight of 250T and maximum length of 39m) and hammer (300T). The team decided to deploy:

Fryslan is the largest inshore wind farm in the world surrounded by dikes and access is through locks, limiting the dimensions of barges that can be used. The shallow waters further limit conventional installation methods.

Offering a solution to the challenge, Sarens engineering and operations team designed a large spread to keep the draft at a minimum. A plan was proposed to use existing barges from the Sarens fleet, and couple them with the Sarens Modular Barges to create a barge more than half a football field, and was named: the “Sarens Soccer Pitch”.

The SSP consists of 88 Sarens Modular Barges, with two sets assembled in a similar way as the Floating Foundation Installer (FFI) at Champlain, and the Josef-Rosa barges being positioned in between to create a larger water plain area. 42m long MB2500 beams were installed on top of the barges to spread the load of the main crane across the three barges. The main crane used was the PC 6800 in configuration SSL/LSL_S1 - a 72m main boom and super lift carrier. This way the outriggers of the crane were directly placed on the modular beams, while for the SL carrier a platform was created for slewing of the carrier. The barge was equipped with 4 legs that were pushed into the seabed for stability.

The barges were prepared and assembled as much as possible in Gent and transported to the mobilisation location in Lelystad (NL). The Modular Beams and the PC6800 were transported by road. In Lelystad our rigging team worked extensive hours to get the spread ready in time. Due to limited mobilisation area precise plan was made for storing all items before they were installed on board the barge and a CC2800 (72m SSL) and a LR1350 (LN 42m) were used.

The installation of the monopiles started in September 2020. Mobilisation started in July and due to limited mobilisation time a plan was developed to have all main components pre-laid on-site for quick installation. The SSP was fully operational within six weeks and was then towed to the location of the wind farm.

Installation of the monopiles was a 24/7 operation, weather permitting, and required a total crew of 18 people working on the SSP. The monopiles were delivered directly from the manufacturing yard in Rostock (Germany), where our SL 3800 loads them onto the supply vessels, to the SSP in the field. In combination with a tailing sheerleg, the monopiles are upended and positioned in the Gripper. The PC 6800 then lifts the hammer on top and the monopile is piled until designed depth.

According to the Project Manager, Mart Van Hoorn, “The fastest the crew has managed to install two monopiles is during one 12-hour shift which is a big achievement. Just before Christmas all of the MPs are already installed, exactly in line with the planning.” He adds, “In spring 2021 Sarens will start WTG installation with the same barges and same crane equipped with a longer boom.”