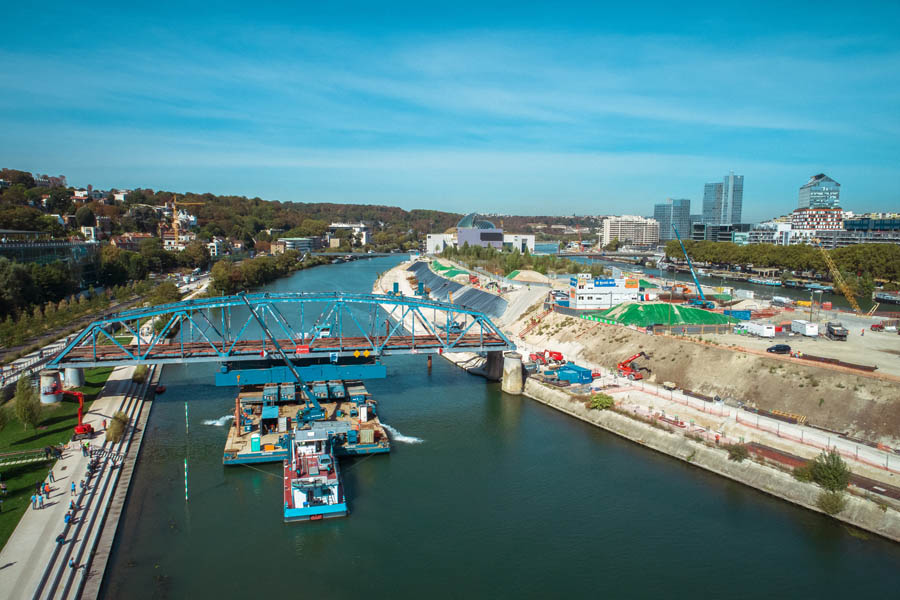 To remove it successfully, Sarens used the following equipment:

Selecting the right equipment was very important for this project. Because of the weight and size of the bridge, a barge with significant dimensions was required to ensure stability. At the same time, it had to have a narrow enough width to navigate up the river Seine. Sarens' solution was to deploy the twin barge Karel-Victor, which could navigate the river uncoupled and then be coupled to double its width once at the quay.

The four SPMTs and transport structure were assembled on the quayside prior to the barge's arrival. This required precision and skill due to space constraints at the quay. Once the barge docked, the SPMTs were driven on board using 12 metre RoRo ramps, and final preparations were made for the bridge's removal.

The following day, the barge was brought into position below the bridge, where it performed the lift using the SPMTs' hydraulic system and by ballasting water out of the barge.

Once the load was transferred to the barge, the SPMTs rotated the bridge by 90°. Then, the barge docked at the quayside so that the SPMTs and bridge could be driven off. During this phase, ballasting continued to ensure load compensation.

At the quayside, the bridge was positioned on top of four CS1000 jacking towers. The SPMTs and transport structure were then removed from below the bridge, and the bridge was jacked down.

"There was very limited space to execute our quayside operations," explains project manager Kenny Decoster. Even so, the Sarens team worked carefully and precisely to successfully complete the bridge removal.