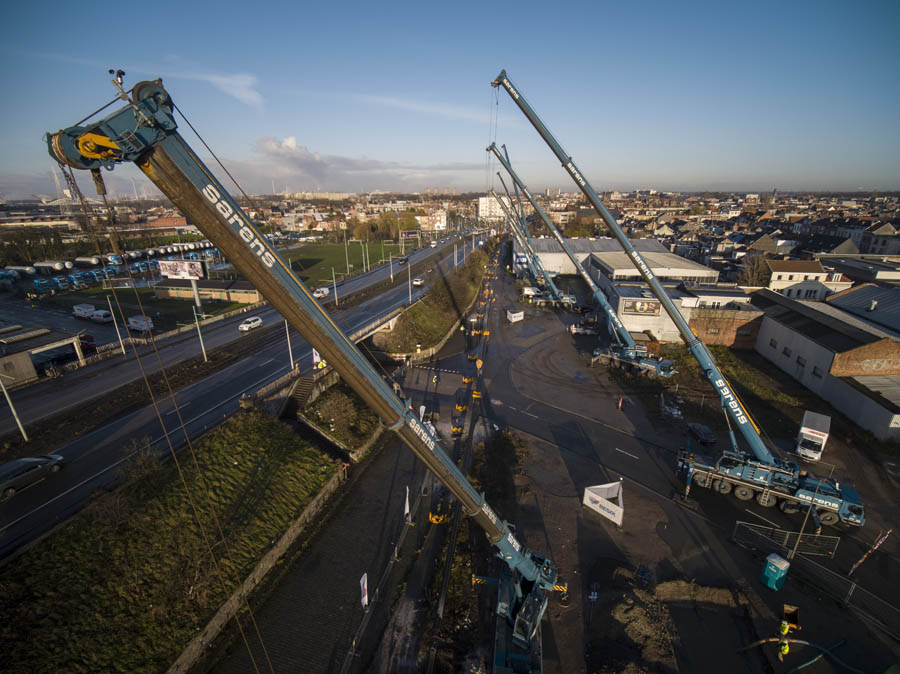 In Merksem, Belgium, crews were recently hard at work completing the construction of a new tunnel for a gas pipeline below the existing Albert Canal. The gas pipeline previously ran across a nearby bridge, but due to bridge reconstruction, that portion of the pipeline needed to be placed along an alternate route.

With the tunnel newly drilled, client Van den Berg / Besix tapped Sarens to install the 274 metre-long gas tube inside the shaft. This precision operation involved eleven cranes and careful execution by everyone on the ground.

Sarens deployed nine telescopic cranes ranging from 40t to 100t capacity, in addition to the client's two existing cranes. Setting up the cranes took approximately an hour and fifteen minutes, and they remained at the site for one day.

To successfully execute the operation, the cranes worked together to simultaneously lift and hold up the pipe. They worked without visual contact, and were guided by the lifting supervisor. Bit by bit, the load was then inserted into the pipe shaft at a precise angle and pulled carefully through the tunnel via mechanisms on the other side of the Albert Canal.

Two challenges that the 11-member team faced were limited visibility and confined working conditions. For example, in normal conditions with more available space, smaller cranes could have been used and positioned right next to the tube.

Sarens congratulates the crew and engineers on a successful operation. "We are very satisfied with the cooperation," says Maarten Pombreu, Business Line Manager, Horizontal Directional Drilling. "The result is very good."