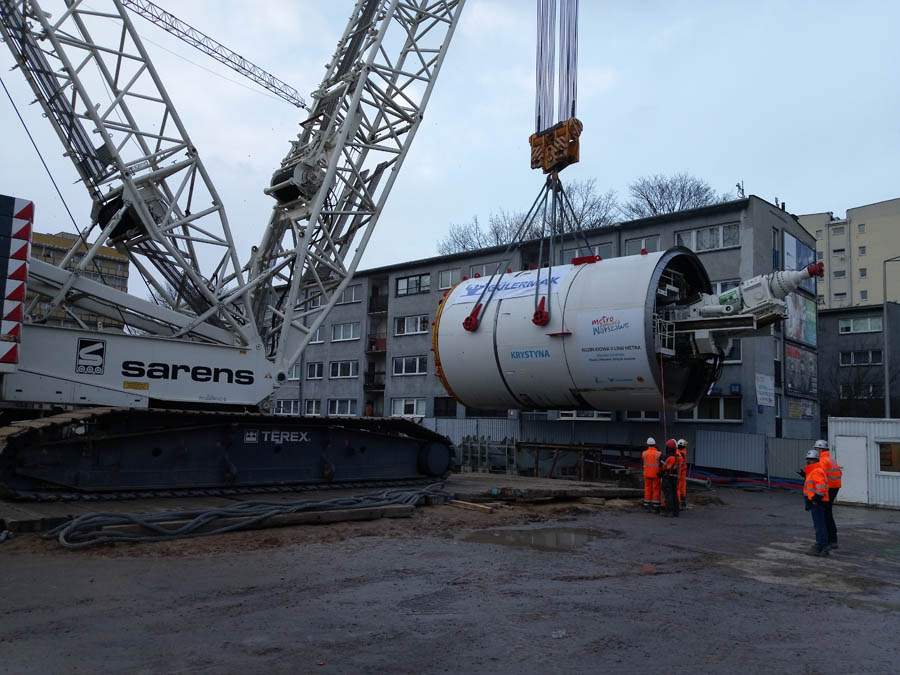 For the expansion of Warsaw Metro's rapid transit system, Sarens was brought in to transport and load a tunnel-boring machine (TBM) to be used in the construction of a new transit line.

The operation was performed at the C06 Księcia Janusza underground station for the second metro line currently under construction. The €209 million expansion project, which is being led by Italian firm Asaldi, began in 2016 and is expected to last for 36 months.

Next, the Sarens team had to assemble the TBM. For this part of the operation, one of the biggest challenges the team faced was the lack of space. Crawler cranes were selected because of their ability to travel on the construction site. The LR 1350 was used to build the TBM on the ground, in the L configuration (36m, 125t + 38t).

With the assembly completed, Sarens prepared to lower the TBM underground. The C2800-1 crane was used to lower the 400-tonne load, using the SSL configuration (36m, 180t + 60t, 300t SL). The crane lift load was at a 13m radius, with an extended radius to 16m and 90° slew. The load was rotated into position, and the crane drove six metres to lower the TBM in place.

"The greatest challenge was to fit the load and safely place it under the ceiling," says Mariusz Sudol, Country manager, Poland. "The clearance was only 40 cm and our team safely performed the operation."

Both cranes deployed on the project came from Sochaczew, Poland. Each was assembled within three days.