Sarens Home
»
About
»
News
»
Sarens Installs the “Verbindingsbrug” Bridge in Zeebrugge
Sarens transports and installs the largest carousel bridge in the world.
12
July 2022 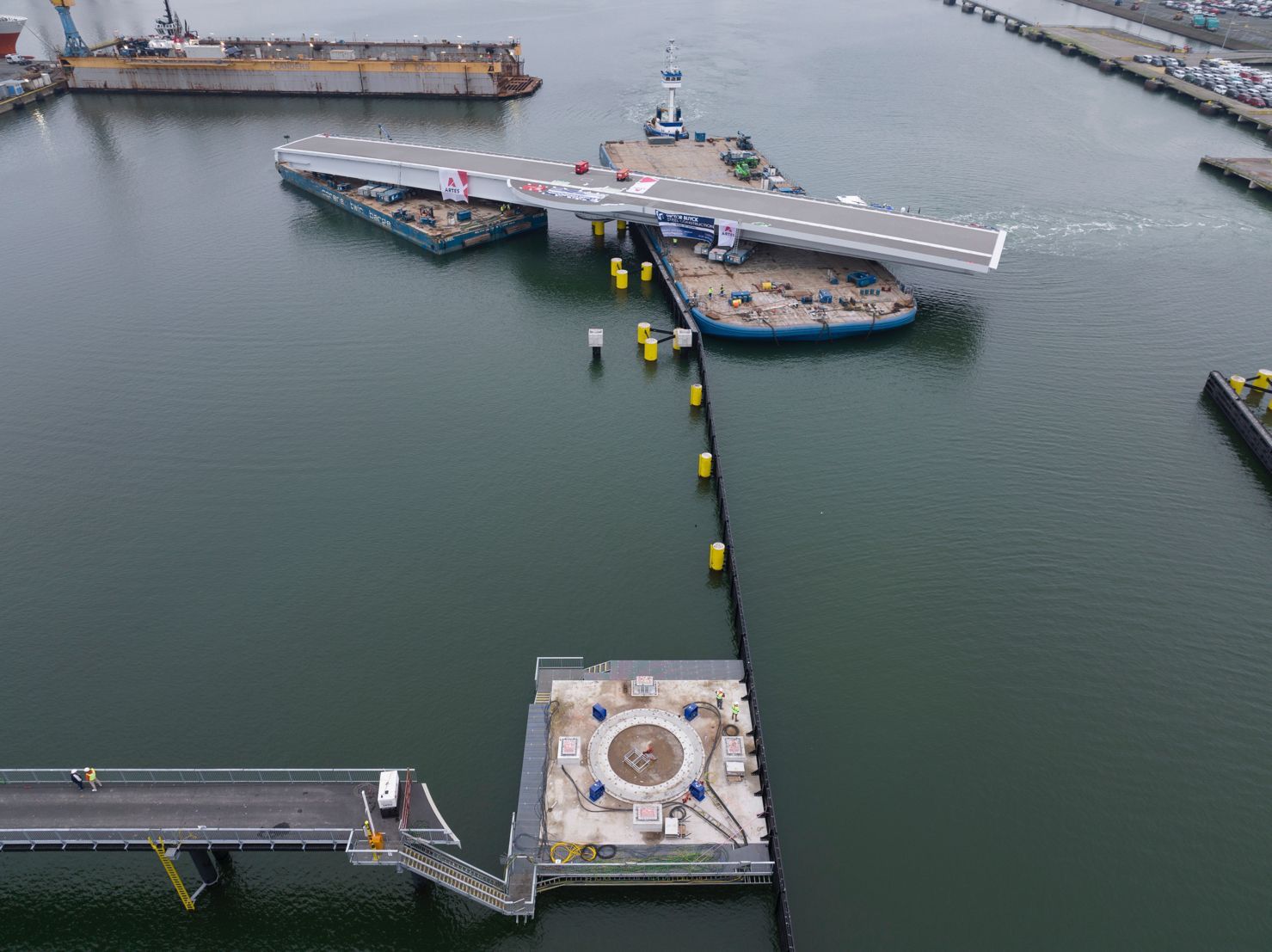 In 2020, Sarens received the order to transport and install the largest carousel bridge in the world for our client Buyck, a well-known and trusted partner.

The biggest challenge Sarens faced was that the client had never built a bridge this large at their workshops in Ghent. Sarens would have to transport the bridge part from the roro quay and onto its barges, navigating it through a small and shallow canal with many low bridges.

During bridge construction in September 2021, Sarens assisted with driving in and placing the carousel, a high-tech propulsion drive that would be used to open the bridge in its operational state. To mount the carousel under the bridge, eight CS450 jacking towers raised the 2.000T steel part some two metres so it could be positioned under the bridge span using 10 axle lines SPMT.

A few weeks later, the entire bridge, including the carousel, was weighed using eight 500T weighing cells and corresponding jacks, in order to determine the exact weight and centre of gravity of the entire structure.

Finally, in January 2022, the more impressive part of the project could begin: the bridge transport to Zeebrugge. Because Sarens’ larger “North Sea” barges, like the Paula and the Louis, could not reach the roro yard in Ghent, the bridge was first loaded onto Sarens’ twin barge Karel-Victor.

Using 66 axle lines SPMT, Sarens operators drove the bridge onto the barge during a 12-hour canal closure. The 130-metre long, 2.200T heavy bridge deck took up the entire canal, and driving it onto the barge was a feat in itself as the pontoon’s strength and stability were calculated to the limit. Once the bridge deck was completely on deck, it was secured to the barge with chains and braces.

Next, the pontoon was ballasted to a draft of 4.200mm, or 300mm freeboard, so that it would have a 10-15cm clearance under bridges as it passed through the narrow, 3km-long “ringvaart-canal.” Because the bridge was wider and longer than the pontoon, the pushers were coupled directly to the bridge instead of to the barge.

After sailing down the canal under complete closure and police escort, the pontoon could then sail on to Ghent Harbour, where the larger pontoon, Louis, was waiting. With the aid of SPMTs, the bridge was then transferred from the Karel-Victor to the Louis. A few days later, Louis began the journey from Ghent to Zeebrugge via the North Sea. The Karel-Victor also left for Zeebrugge, partly driving over the bridge from Louis to Karel-Victor so that each pontoon carried half a bridge.

Finally, during a 48-hour closure to ship traffic, the pontoons, aided by three push boats, sailed the bridge into position using a “catamaran” configuration. They were secured with winch cables and positioned to within 1 cm above the bearing, then ballasted so that the bridge could be lowered onto its final supports. After the client made all the bolted connections, the pontoons were removed and sailed back to the port of Ghent.

Sarens would like to thank everyone involved in this complex but rewarding operation!