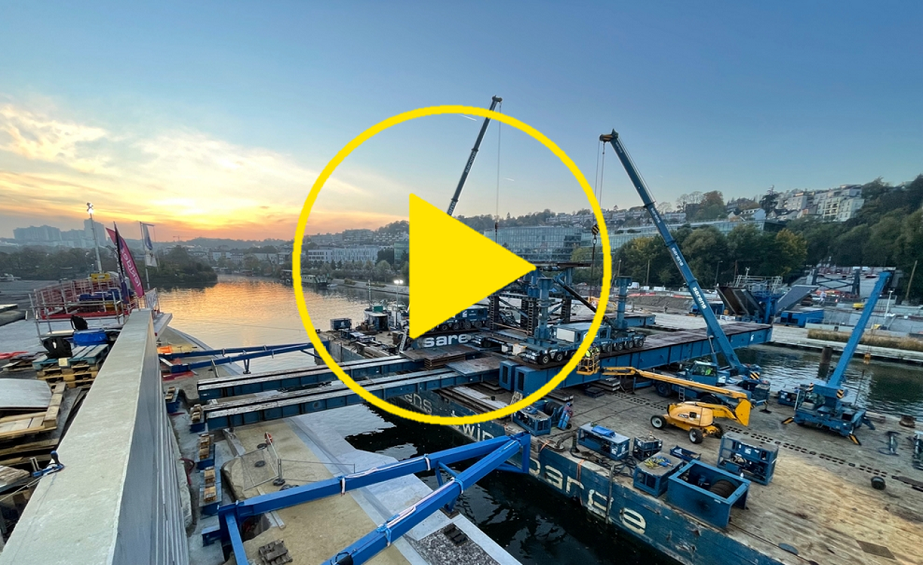 Sarens installed the new bridge sections of the Seibert Bridge across river Seine in Boulogne Billancourt, France. The Seibert Bridge, built in 1931, had to be demolished in 2018 due to the very strong corrosion of its steels.

The two spans of the bridge weighing around 2240T – one over the road and the other across the river Siene, will connect Seguin Island from the Seine Musicale in the city of Meudon. The 41.5 million euros project will be open to public by the end of 2025.

The bridge section made of 125 smaller steel sections were transported to Île Seguin and assembled on site between December 2020 and August 2021. According to Project Engineer, Tomas Spinnoy, “The bridges were pre-assembled on an Island 10m higher than the water level of the Seine-river. The distance between the barge and quayside was approximately 15m due to which it was necessary to build a complex structure to transport these bridge parts to their final position. Our team worked day and night in two shifts to accomplish the move.”

Due to the dimensions of the bridge, a barge with significant dimension was required to ensure stability. However, due to the limitations of the river Seine, only a barge with limited width could be mobilised to the site. So the team decided to use twin barge Karel-Victor which could be transported uncoupled on the river Seine and then coupled once on site to double the width. The other equipment deployed for the project were:

The laying of the spans was completed in two stages: