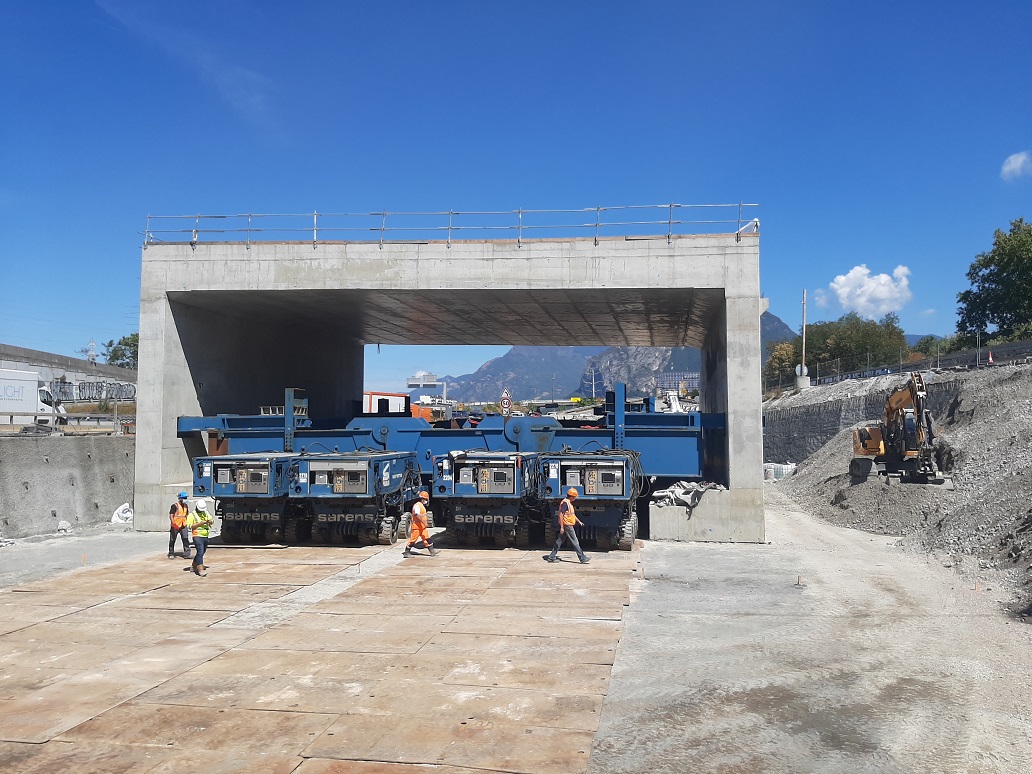 In August of 2020, Sarens installed the 2.300T “Pont de Catane” bridge as part of an expansion to Grenoble’s ring road, which had previously been infamous for traffic congestion. The goal was to enable traffic to pass below the bridge in one direction, but because the older bridge was not wide enough for a three-way road, a new one was deemed necessary.

The new concrete bridge to be installed along the A480 in Rondeau measured 27 metres long and 20 metres wide. So as to minimise traffic disruption, the new bridge was constructed alongside the old one, then moved into its new position over the course of one day.

During the installation, Sarens used four 18-axle lines of SPMTs, four PPUs, and four sets of 1500x1000 modular beams with cantilever beams and locking frames. Crucially, because of the height and weight of the 2.300-tonne concrete bridge, Sarens prioritised avoiding too high a deflection, which could have led to the concrete wall collapsing.

“This is why special transport was used,” says project manager and engineer Maxime Minetti. “Instead of picking up the bridge from the top, we opted to use modular beams with cantilever beams on top. These were inserted into bridge openings that the client had made at our request. Installing the beams had to be done with high precision because each had to fit its opening with a tolerance of only 5cm.”

Enhanced engineering was applied throughout the project to control for all the different variables that would be acting together. For example, Sarens had to find a suitable combination of end and connection pieces for the modular beams. These also had to fit a bridge that wasn’t symmetrical, but needed to be set on the SPMTs in such a way that they received more or less the same load from the bridge. Moreover, the beams and cantilever system had to be prepared before project execution, which included welding of the locking frame, coupling of cantilever beams, and manufacturing a shimming plate to fit some of the locking frame.

Before the project commenced, Sarens SPMTs were transported from another work site in Arles, and steel equipment arrived from Wolvertem, Belgium. Transport of the equipment required 27 trucks, arriving in a carefully predetermined order so as to optimise available space. One week was required for assembly.

During the operation, Sarens worked right next to the ring road and road interchange, in a confined space with client co-activity. Because of this, good logistical preparation and communication were necessary throughout the project, which took place during a heat wave as well as the Covid-19 outbreak.

The operation was conducted on behalf of client Demathieu & Bard, with AREA as the end client. Sarens would like to congratulate everyone involved on an exceptional project!