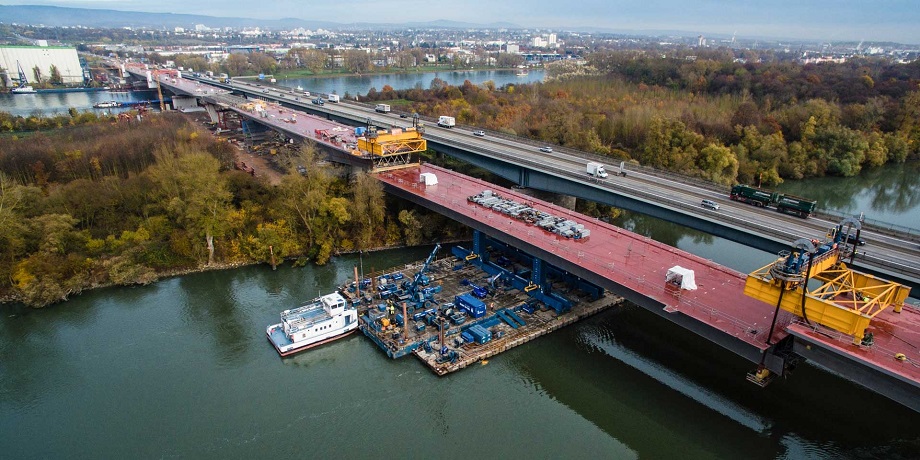 Since 1962, the Schierstein Bridge has spanned the river Rhine to connect two state capitals, Mainz and Wiesbaden. The bridge was originally designed to accommodate 23.000 vehicles per day, but within a few decades, it was straining under the daily load of 80.000 vehicles.

By the turn of the century, extensive corrosion had rendered the bridge beyond repair: authorities announced that the entire 1.282-meter long structure had to be abolished and replaced. Today, a new bridge is being built alongside the old bridge in phases, with completion slated for 2020.

Sarens has been a part of the bridge replacement project since January of 2016, when teams transported and installed the first 2.000T bridge segment on the Wiesbaden side of the main Rhine channel. Then Sarens performed the specialized transport and lifting of another 2.000T pre-assembled bridge segment, debuting the new CS1000 jacking system.

In December 2020 the team installed the heaviest and the 120m long middle section of the bridge. Sarens performed the bridge installation in Wiesbaden gapping the Mombach branch of the river Rhine with the help of:

As before, the Rhine water was low for a very long time so the team had to be on stand-by most of the times. The river had to reach a minimum depth of 3 meters before Sarens operators could transport the load on twin barges.

Once the river reached the desired depth, the bridge section were loaded-in on the twin barges, transported to the installation site, and installed safely.