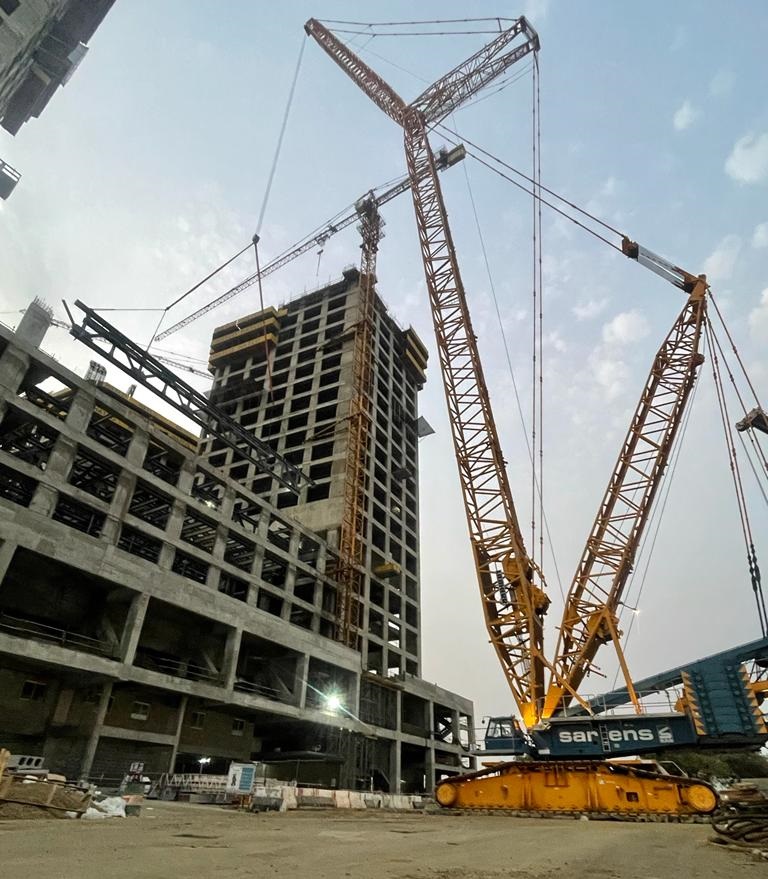 With the construction of the glamorous new Four Seasons hotel in Jeddah, Saudi Arabia, the Al-Hashemiah Contracting Company called upon Sarens to perform a flawless lifting operation for its ballroom trusses.

Manoeuvring the 750-tonne LR1750 crawler crane around the congested project site, Sarens successfully installed trusses weighing up to 63,5 tonnes at heights ranging from 30 to 90 metres. Lifts were performed using four lifting points without a spreader, with the crane slewing and crawling in SLDB 119m and SWDB 77m main boom + 70m flyjib configuration.

A total of 35 trailers drove the crane across 1.400 kilometres of road, a five-day journey that required special permits from the Kingdom of Saudi Arabia. Six crew members then assembled (and later disassembled) the crane, which remained on site for six weeks.

The beautiful location of this soon-to-be luxury property is positioned near the sea, but that presents its own challenges as high wind speeds were a concern during crane operation. The two-person Sarens team also had to contend with a worksite located in a busy residential area, and traffic management was a major concern. To perform each lift, the crane had to park in the middle of the road, which required road closure permits from assembly through full disassembly.

“The Four Seasons project was quite interesting,” says Sarens Project Engineer Shuaib Kadhem. “The site was very congested for a big crane like the LR1750, so the team had to communicate closely throughout the entire operation. The challenging part was the rigging arrangement: we had four lifting points with an eccentric centre of gravity, which meant the use of a spreader was not an option. Despite installations as high as 90 metres, we lifted all the loads safely and proved once again that at the end of the day, there is nothing too heavy and nothing too high.”