Sarens Home
»
About
»
News
»
Sarens Executes a Unique and ‘Out-Of-The-Box’ Solution
During the Covid-19 pandemic and following all safety measures, Sarens provides out-of-the-box solution for heavylift and transport operations at the Fawley Refinery in the UK
14
April 2020 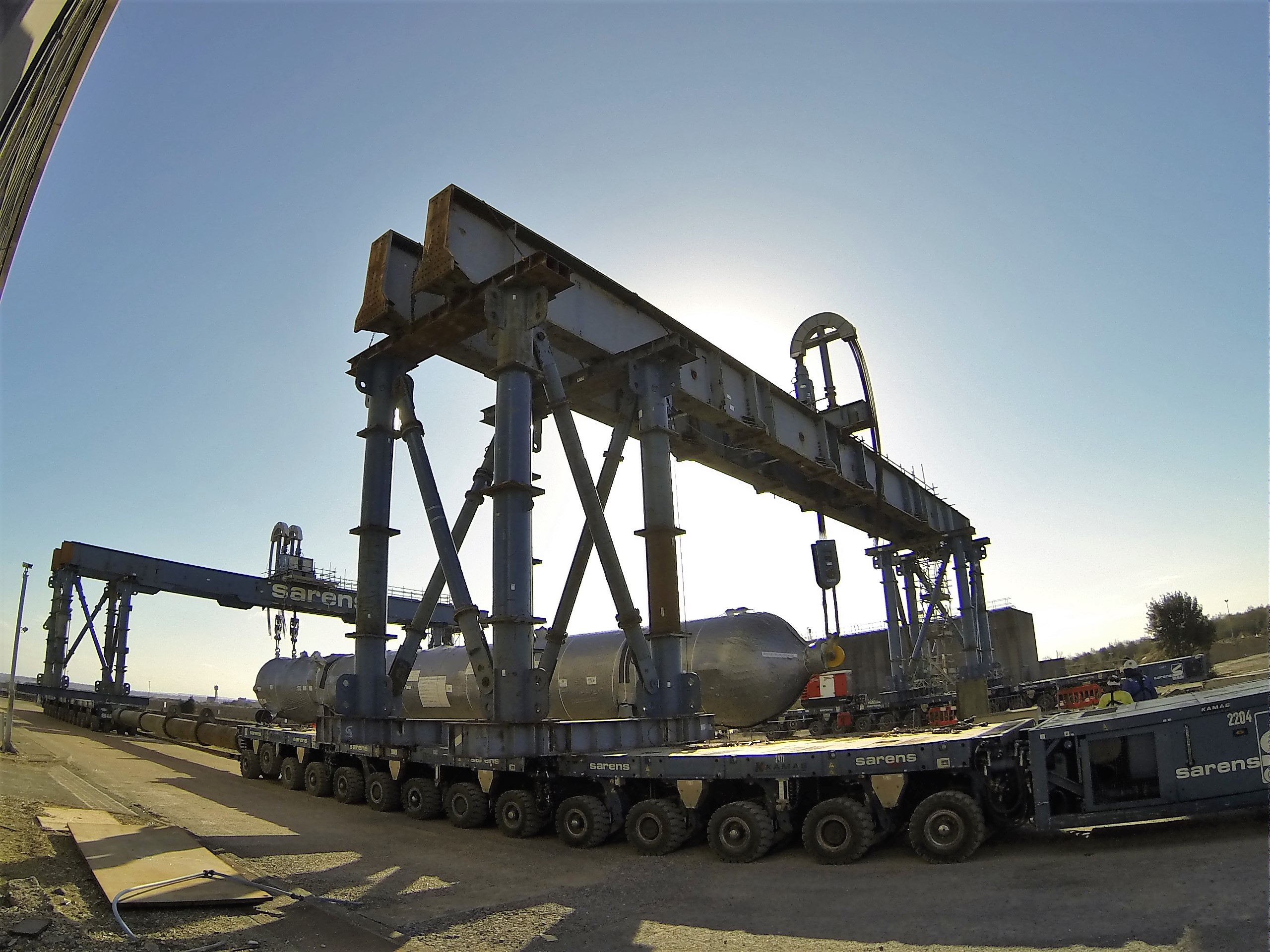 The FAST Project is an expansion of the Fawley Refinery - the UK’s largest refinery and one of the largest and most complex refineries in Europe. The project involves the transhipment from delivery vessel, barging, load in, transport and installation of two new columns, 50m in length and weighing upto 1250T.

Sarens proposed a unique, daring and ‘out of the box’ solution to both Fluor and ExxonMobil, which set Sarens aside from the rest of the competition and allowed us to work with client and owner to develop proof of concept prior to contract award. The proposed solution was a mobile lifting gantry spanning the quay where the cargo would arrive – the system comprised 3 strand jacks for lifting the load, supported by two portal frames each consisting of a massive transverse twin lifting beam, themselves supported by tower systems, located on SPMT trailers which provided the mobility of the systems.  The project was executed during Covid-19 pandemic, Sarens made a plan for every activity so that guidelines and social distancing could be guaranteed whilst executing complex scope of works, eliminating, and mitigating against any exposure risks.

After contract award, we embarked on the complex task of detailed engineering and overcoming many challenges– low GBP; limited footprint for operations; a narrow delivery channel/basin/quay which restricted the selection of a suitably stable wide barge but in itself was wide enough to make the gantry a significant span. Transhipment involved load-in from the geared Heavy Lift Delivery Vessel at Southampton onto a barge selected to both accommodate the huge loadings imposed by a 1250T column supported by only four saddles, and narrow enough to fit into the restricted quay at the Fawley Power Station (the load-in location).

We had to design the unloading gantry, whilst overcoming challenge of keeping the nearest point of the SPMT footprint 6m away from each side of the quay. This increased the length of the lifting beams to over 34m. All this equipment, including the massive beams and supporting towers, were sourced from within Sarens extensive fleet of specialist lifting equipment.

After load in of the column, we had to think about storage, onwards road transportation and then lifting onto foundation. This was all done in a very short time frame, obtaining permits, identifying routes and required modifications, and then selecting the crane and crane assembly locations in an existing and very congested refinery.

We selected a 1600T crawler crane and identified an area within the refinery to assemble the crane which would minimize the disruption to the day to day activities of the refinery operations and the FAST expansion team’s operations.

The engineering was undertaken by several teams in various Sarens Engineering Hubs, all working together and sharing information effectively to ensure that all the steps could be covered and that nothing was left to chance. It was a complete pan-European effort and the timely submission and subsequent approvals of all deliverables was testament to the best engineering teams in the world. With all the planning finalised, we were now just waiting for the fabrication to be completed and the logistics to begin.

Following notification that the column was ready to be shipped we were galvanised into execution mode and we mobilised all of our manpower and equipment to the different sites and waited patiently for arrival. We had a barge team in Southampton Port, a SPMT and Gantry team in the Fawley Power Station and the crane team within the refinery site. All the teams worked in unison and parallel, sharing resources and skills to quickly and safely assemble, prepare and commission all of the equipment needed to execute the works.

As the Heavy Lift Ship was coming into view on the horizon, Sarens team and equipment was ready and waiting. We had planned for months and were keen to start to implement all the great ideas and innovation we had been discussing for months. All of our paperwork was approved and in hand ready for us for us to get going as soon as the cargo was available to us.

Sarens received the columns, from the Heavy Lift Ships gear, onto the Sarens supplied barge, where we secured the column to the barge deck utilising a team of Stevedores and welders from the local area.

Once all secured and the welding was inspected and approved, to the satisfaction of the MWS, the barge was ready to set sail the short distance from the Port of Southampton to the quay at the Fawley Power Station. The first ‘pinch point’ was approaching, the entrance to the Power Station finger quay.

The barge and column were expertly manoeuvred by the tug captains, with some assistance from the Sarens winches on board the barge, and the barge was safely delivered into location with very little room to spare, but all within the expected tolerances carefully planned and scrutinised months in advance.

The Sarens team then moored the barge at the basin and began the works of releasing the sea fastenings in readiness to offload. Once ready, Sarens prepared for the unloading.

With the 34m wide portal gantry frame, supporting the lifting strand jacks, driven into place over the basin by the SPMTs Sarens achieved the lift of the 1250T column in a single day with all equipment operating within the tight tolerances expected and planned for.

This was a world first and the engineering and calculations behind this incredible concept were vast but incredibly accurate. This engineering was collated into a clear and concise execution manual for the skilled operators and onsite engineers to follow meticulously for both the assembly and execution.

The unload happened (as planned and expected) very efficiently, calmly, quietly and event free. We slowly hoisted the huge column off the barge deck and travelled the gantry away from the quay and towards towards the storage/staging area. When in position we slowly and carefully set the column onto pre-set, stools and load spreading mats.

Once the column was stooled off and there was no weight in the gantry, we disconnected the gantry from the load and then in turn, utilising the self-offloading capability of the SPMTs, stooled the gantry onto separate supports and removed the SPMT’s from underneath. The SPMTs were reconfigured into the combination required for road transport of the load.

The lifting of the columns has now been delayed until June and so the columns both sit in storage while Sarens still plan and prepare the lifting and all the associated works within the refinery.