Sarens Home
»
About
»
News
»
Sarens Erects, Transports, and Loads Out Offshore Structures for Chevron
When Chevron needed five cargo loads for an offshore subsea structure loaded out in Malongo, Angola, Sarens was ready to perform.
13
September 2022 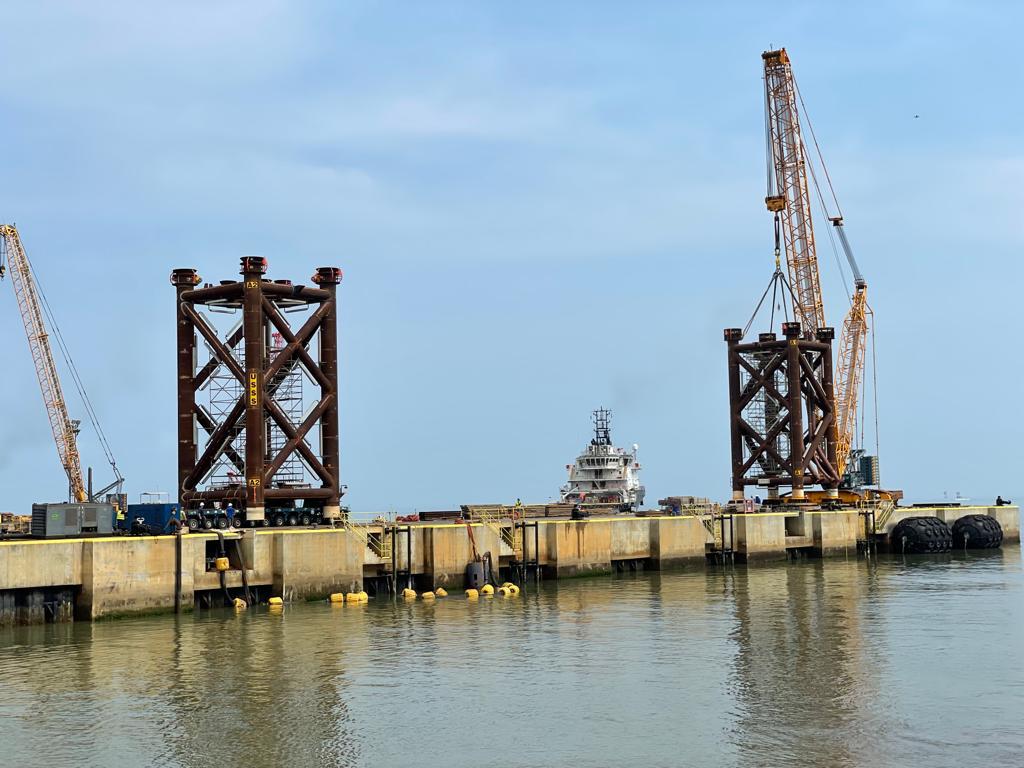 When Chevron needed five cargo loads for an offshore subsea structure loaded out in Malongo, Angola, Sarens was ready to perform.

According to site supervisor Matt Mckeough, “Most of us here for Sarens have worked together in the past on the TCO project for Chevron, so we all align with the expectations from the client and work well together.” And, he added, “It’s also a nice benefit that travelling to work every day can be somewhat of a safari with the protected species of wildlife that live here in the concession, including monkeys, bats, deer, jackals, and various reptiles.”

For this operation, Sarens used the following equipment:

Sarens equipment arrived from all over the world: the CC2800 travelled from the UK, the SCX2800 came from France, and the SPMTs were brought in from Australia. However, getting the equipment to the site was a big challenge: the site in Malongo did not have a facility deep enough for normal seagoing vessels, prompting Sarens to transship the cranes to another location for reloading onto a smaller barge. This required two teams at both locations to send and receive equipment in the correct order.

Transporting the load cells from Belgium also presented a logistical challenge, but as always, Sarens was able to do it by the dates required by the client. The help and assistance of colleagues in the logistics department was essential, and they were instrumental to a smooth mobilisation.

This operation called for the offload, transport, and lifting of the subsea structure components.

One of the most critical parts of the operation was the transportation of the upper and lower subsea structures. The slope along the transport route was 3.4 degrees at some points, which pushed the engineering for the SPMTs right to the limit. Nevertheless, Sarens ensured a safe and smooth transport thanks to reliable equipment and the right people on the job.

Next, each piece of cargo was transported to the CC2800 crane for load-out onto a vessel that would then sail the offshore rig to the installation site at sea. The Sarens CC2800 was set up on a super lift configuration in a very tight location at the dockside, and positioning it and the load properly was critical. The natural movement of the vessel during the lift also presented a major challenge to the crew, requiring precise coordination between the lift supervisor and crane operator, as well as the team handling the tag lines, to ensure a smooth and safe set down from crane to vessel.

“It’s nice to see the reaction and excitement of the client and people who see the large cranes and transport equipment for the first time, and are impressed with their capacity and manoeuvrability,” shares Mckeough.

Special thanks to Niall Farley and Timothy Blomme, who made the transportation portion of the project seamless, as well as all the other team members who worked hard to make this project a success.