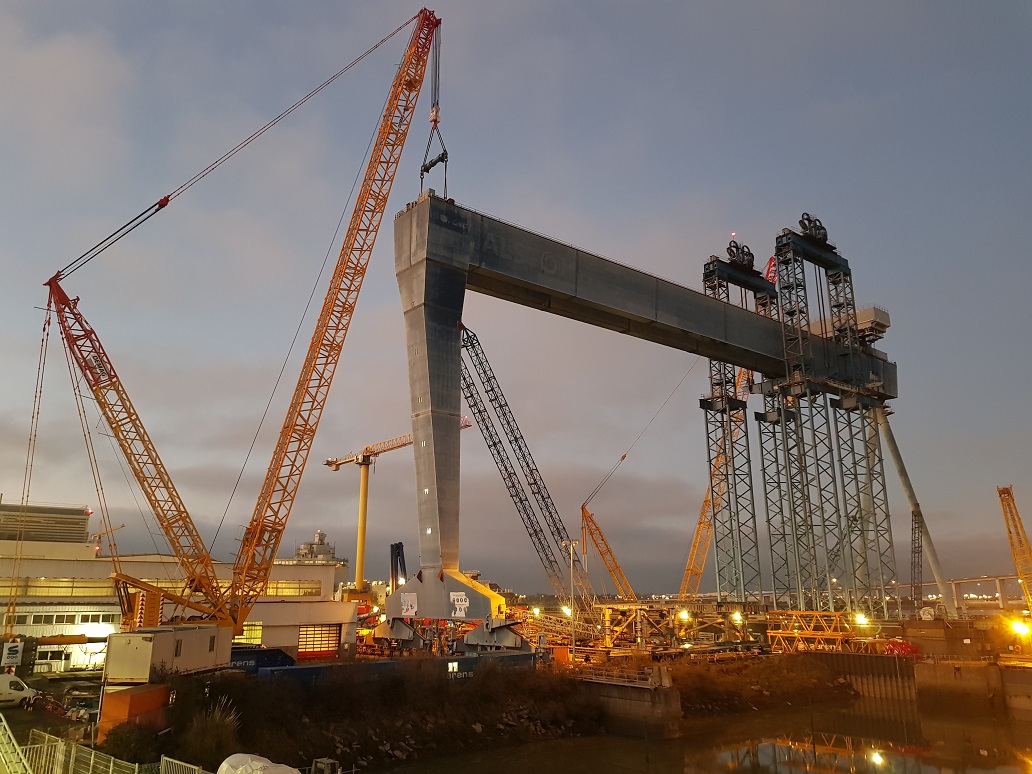 Sarens was recently contracted to dismantle an existing Goliath gantry crane and replace it with a new, larger one in St. Nazaire, France. The newly-installed Goliath crane spans 130 metres over a dry dock and a ground-level construction area.

The full range of Sarens equipment for this project included:

Sarens dismantled the old gantry crane using two CC 6800s fitted with a 96-metre and 114-metre boom, in addition to a strandjack tower system. The freestanding tower arrangement was built up to a total height of 103 metres from the floor of the dry dock using the SMLT 5800 and SMLT 3500 systems. A beam system on top of the towers supported four 650-tonne strandjacks on a skid system, and a ‘low’ level skid system 20 metres above the dry dock floor helped to move the Goliath’s main girder out of the dock once lowered. Additionally, 152 axle lines of SPMTs were used to transfer the crane components to the laydown area.

What made this project unique were the solid tower systems (without guide wires) built to support the high-level skidding system and strand jacks, as well as the use of the second, lower-level skidding system for overtaking the load from the strand jacks and placing them onto the SPMTs. Sarens’ innovative and detailed engineering also called for the use of the underground reinforced concrete dock floor, and supporting the hinged and fixed legs so they would remain vertical while lowering the main girder (horizontal beam). Sarens also depended on advanced equipment like the remotely-controlled strand jack system, in combination with a stand-alone level measurement device, to lift the main girder at a perfectly horizontal level and avoid overloading the crane or tower system.

Finally, there was a short execution window for this project. The dock was emptied by the end of December 2021 and full operation had to be completed before the end of April to allow a new ship to leave the dock.

It took one ship and over 400 trucks to mobilise all the 6.000 tonnes of equipment to the project site, so that they were ready for when the new Goliath gantry crane parts arrived via barge and vessel from Poland in November.

Load in of new crane parts

The main girder of the old Goliath crane was taken down with a CC 6800 and strandjacks mounted on top of the tower system. Next, its hinged and fixed legs were disconnected. The fixed leg was stabilised with an arrangement of steelwork and SPMTs, then driven along its rail so that it could be moved out from under the main girder. The main girder was then skidded five metres on top of the towers, clearing the top of the hinged leg before being lowered to ground level. Using a combination of SPMTs and low-level skid system, it was then ‘launched’ out of the dry dock before being driven to the laydown area on SPMTs. The hinged and fixed legs were then taken down with the CC 6800 cranes and placed on SPMTs to be transferred to the laydown area.

Over the course of two years, extensive engineering and planning were needed to prepare for all operations, and numerous challenges had to be overcome along the way. The team’s aim was to develop an identical process for dismantling the existing crane and erecting a new one, so that the same equipment could perform both operations.

This project was an international affair, and engineering and planning were done in close collaboration between Belgium and the United Kingdom. During execution, the team consisted of people from Belgium, the United Kingdom, France, Ireland, and Slovakia, with English being used as a universal language for communication.