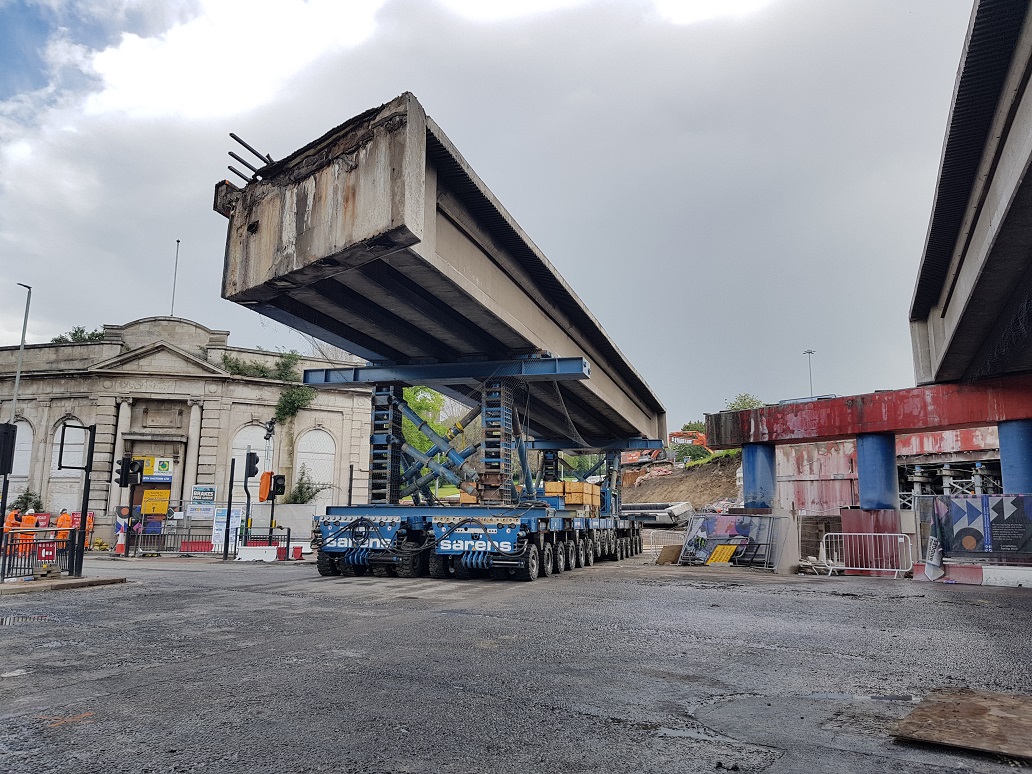 Sarens is proud to have completed the dismantling of two A64(M) bridges over the A61 Regent Street in the centre of Leeds, UK. The two concrete bridge structures were built next to each other in the 1960s and needed replacement due to failing abutments and long-term maintenance issues.

For this project, traditional demolition methods could not be used due to the proximity of neighbouring residential properties. Responding to these constraints, Sarens won the project by proposing a dismantling solution that involved removing each bridge deck in sections before transporting it off-site for crushing and recycling. Sarens’ proposal also minimised impact on the busy city centre, with the removal of each bridge completed over two 56-hour road possessions.

Sarens’ solution combined the use of SPMTs with the CS250 jacking system and a 750-tonne LTM1750 telescopic mobile crane from the Sarens UK and Sarens Projects fleet. Engineering was completed by Andrew Cockshoot and Tom Betts of the Sarens UK TS team, who also provided onsite support during operation.

To dismantle each bridge, Sarens first removed the 33-metre long post-tensioned centre span sections, which weighed up to 400 tonnes. This was done using SPMTs and a CS250 jacking system. The first section was driven out from between the two side spans with only the clearance provided by the expansion joints between the spans, measuring less than 50mm at each end.

Once clear of the bridge, the assembly was driven a short way to provide space for the LTM1750 crane to be rigged. The centre span section was jacked down using four CS250 jacking towers before being driven up the slip road onto the closed section of the roadway, where the SPMTs offloaded the deck onto stools for demolition processing.

The side spans of each bridge, made of 24-metre long pretensioned concrete beams, weighed up to 96 tonnes each. These were dismantled using the crane to lift out each deck beam in turn, placing it onto transport for off-site crushing and recycling.

“Careful planning of the site logistics was key to the success of each weekend possession, ensuring that operations would run smoothly within the congested site,” said project manager Scott Dalgarno. “During each possession we monitored this plan and made changes as necessary to ensure work continued smoothly.”

Sarens would like to congratulate everyone involved with this successful project!