Sarens Home
»
About
»
News
»
Sarens Bridges Germany and France
In December, the tram bridge in Kehl was successfully floated into place by the Sarens team. This process was carried out in two stages using extensive equipment ranging from twin barges via SPMT's to the CS600 Jacking Tower.
5
January 2016 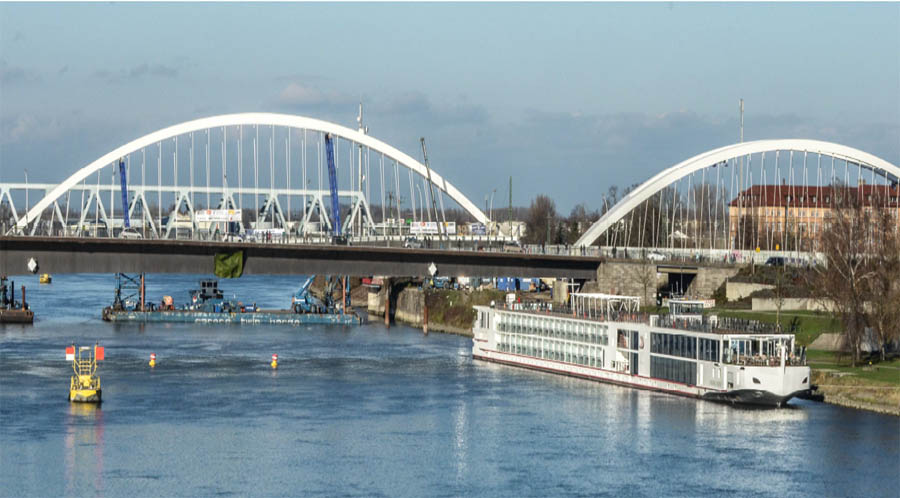 Linking Germany and France, this bridge now spans the Rhine River between Kehl and Strasbourg.  When finally completed, the bridge will be used by pedestrians, and cyclists. The bridge was designed by the French Bouygues Group in cooperation with the German company.

Früh Ingenieurbau. It has two 20-metre-high arches consisting of small box-shaped steel elements. Like both neighbouring bridges, it rests on a central pier in the middle of the Rhine.

Starting in April 2017, CTS's tram line D will cross the new Rhine bridge and reach Kehl railway station on the former traditional route. The first modern tram bridge between Kehl and Strasbourg had been opened as early as in 1897. In the following year, the Strasbourg tramway company's line 1 already went to Kehl town centre. Between 1920 and 1941, the route ended on the French side of the Rhine bridge as a consequence of the First World War. The tram line between Kehl and Strasbourg was re-opened in 1942, but existed only till November 1944 when the Rhine bridge was destroyed by German soldiers during the liberation of Strasbourg.

Kehl and Strasbourg have been working on the expansion of the Strasbourg tramline D across the Rhine to Kehl for years. Once financing by the German federal government, the State government and the EU had been ensured, the project's implementation could be started.

In April and July, the two bridge sections were transported one after the other to the stockyard on the Kehl side of the Rhine near the former customs yard under the supervision of our project manager, Peter Keyen. The basic challenge here was the safe passage of the railway bridge. Skilful ballasting was required to ensure a sufficient distance between the top of the tram bridge section and the lower edge of the railway bridge.

Due to the low water level of the Rhine, the date for floating both bridge sections into place had to be postponed again and again. Finally, the 8 December could be agreed upon for the first section. The preparatory work became exciting when the first section of the future tram bridge had to be loaded onto the floating barges on Saturday. The steel ropes required for fixing the barges in the riverbed got tangled up and could not be unravelled. Thus, the barges could not leave the Kehl side before late Monday afternoon.

In the morning of 8 December, the bridge section was lifted onto the barges until it exceeded the river pier in height. Then, the barges moved slowly towards the pier and the abutment on the French side until the 1,500 ton section reached its position around 4 pm.

Now, the project entered its final stage. On Tuesday 15 December, the team started loading the second bridge section onto the barge. This procedure was completed on Thursday and the section could be floated into place as scheduled.

On the morning of 18 December, many spectators gathered on the Europe Bridge to witness the event. A few hours later, the bridge section had been lifted thanks to our technical know-how and the bridge across the Rhine was complete.