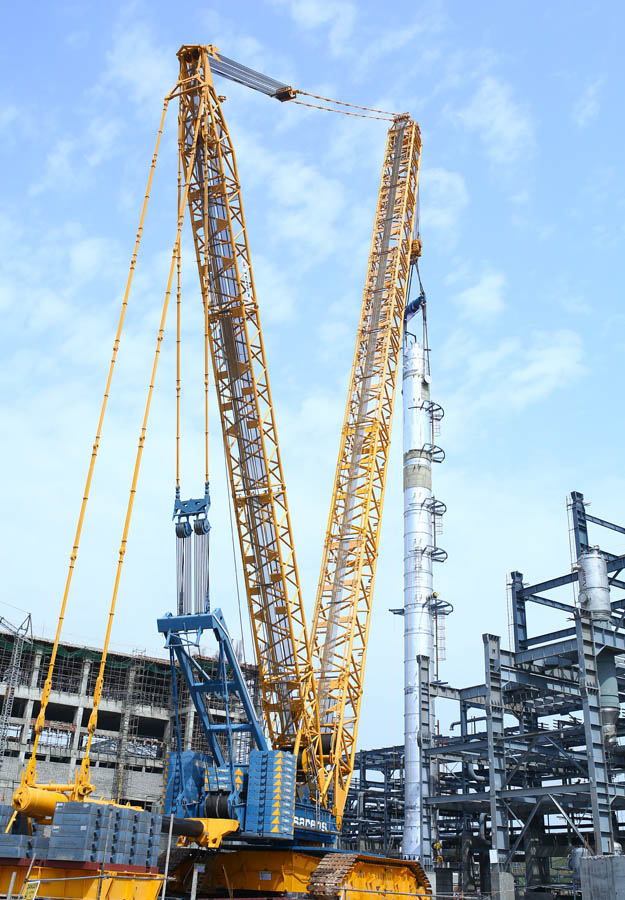 When the Indian government decided to revive and upgrade the Ramagundam fertiliser plant, Sarens was there to help make it possible. The gas-based plant, located 240 kilometres from Hyderabad, will have the capacity to produce 11.2 lakh tonnes of urea per year once it is completed.

The CC8800-1 arrived from Greece and was offloaded in the port of Mumbai before being transported to the project site by road. The Sarens team took seven days to safely assemble all of the equipment, despite constrained working space.

With the cranes ready, the crew proceeded to lift the 425-tonne, 54-metre long urea reactor at a radius of 24 metres. To do it, they upended the reactor using the CC8800-1 as the main crane and the CC2800 as the tailing crane. Then, the main crane slewed and marched to erect the reactor at its location.

"The first erection was completed with precision," said Abhishek Jain, India Country Manager, and Deepak Sharma, Operation Head. "A designated safety officer made sure that the entire lift was safely executed, and we are making sure the next set of lifts are completed in the stipulated time frame."

During the operation, the team faced constant rain, a constrained area in which to work, and narrow travelling roads on the premises. Despite these challenges, the 20-member crew executed the first lift safely and on schedule.

"We are proud of our operations, fleet, engineering, logistics, sales, planning, and support teams for making sure that the CC8800-1 was imported to India, transported swiftly, and executed the projects safely and efficiently," says Navneet Jain, Regional Deputy Director, APAC.

The crane will remain at the work site for another month, where it will erect five more key components, each weighing a maximum of 640 tonnes, among other heavy lift tasks.

Sarens would like to congratulate everyone involved in making this first lift a success!