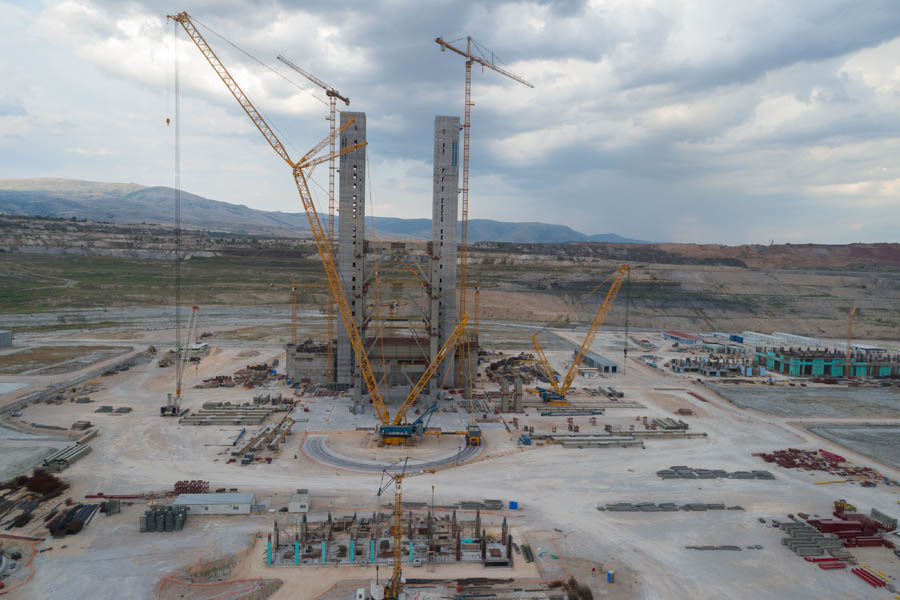 In the mountainous regions of northern Greece, Sarens operators have been braving extremely hot temperatures to install a coal power plant structure at the PPB Power Plant Ptolemaida Unit V.

The installation work is being performed on behalf of client Terna SA, at the site of a 550-megawatt coal-fired power station. Ptolemaida V, the station's fifth unit, is currently under construction. Once it begins operation in 2020, it will have a generating capacity of 660 megawatts.

The installation involves columns and K-bracings for the main steel structure, with the 146t K-bracings (30m x 10m x 2m) picked up at a radius of 65.5m. To raise the K-bracings from a horizontal to vertical position, operators use the main CC8800 crane and a CC2400 or LR1750 auxiliary crane. Sarens lifts two K-bracings (292 total tonnes) and four columns (523 total tonnes) per day, and the items are lifted with CC8800 only slewing (not crawling).

For this operation, equipment from across the globe has been dispatched to Ptolemaida, with cranes arriving by sea and road from South America, the Middle East, and Europe. Among them are:

The CC8800-1 arrived by sea from Kuwait and the CC2400-1 was dispatched from the Netherlands and delivered by vessel to Athens and then by road to Ptolemaida. Meanwhile, the LR1750 came by sea from Venezuela to Thessaloniki and the jib came via road to the site. Transportation took anywhere from one to three weeks, depending on the crane.

"The team performed the operation in a safe and planned manner," says project manager from Sarens. "The ground preparation was done according to the contract and very well executed by Terna. Another LR1750 will arrive on the site in the next few weeks and then all cranes will stay there through the middle of 2018, except the CC8800-1, which will probably finish by October of this year."