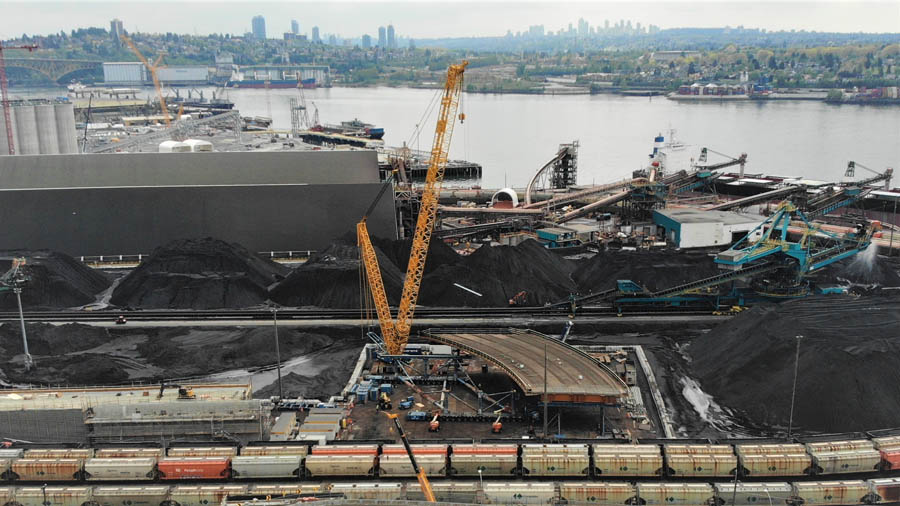 Fluor and Teck collaboration commissioned Sarens to undertake first of its kind rapid bridge installation in Vancouver, BC. Our team had to install steel bridge girders of the Neptune overpass at the Neptune Terminal in Vancouver, Canada across 7 rail lines on-site. The operation was part of the upgradation of a coal handling installation at Neptune terminal.

The equipment was shipped from Belgium, Australia, and USA and the set-up of the equipment for jacking took a week's time. The client appreciated the short duration of the final installation.

The three girders of the bridge weighing around 550T and measuring 50m in length and 25m in width were transported using the Kamag 2400, offloaded by LR1600 and finally jacked up using the swift and efficient CS250 jacking system.

The rail movement was closed for 72 hours and the bridge was safely installed in record time.

According to Project Manager, Sven Janssens, "Although this was a small operation in the grand scheme of Sarens transport globally, it showcased our capabilities to the local market who had never seen an operation of this magnitude. It also solidified to our client that in fact "nothing too heavy, nothing too high" was not just a corporate slogan, but more of our business model which we upheld."

Fluor Construction Manager, Dave Rooney congratulated the team on the successful completion of the project and said, "The move was flawless and that is down to you and your teams working together in the pre-planning of this lift. Please pass my thanks on to all your team members and sub-contractors who contributed to achieving this project milestone, and at the same time completing the move in a safe manner."